President George Q. Cannon as a Special Witness of Jesus 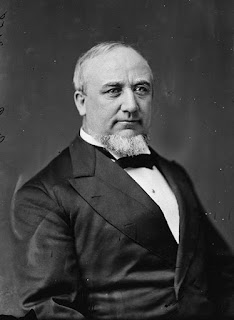 Although President George Q. Cannon is better known today than some others that I have written chapters about, such as George F. Richards and Melvin J. Ballard, memory of him within the Church has still largely faded. (These chapters are all found in my forthcoming book, I Know He lives: How 13 Special Witnesses came to Know Jesus Christ.)

One current project now underway, and supposedly nearing completion, that will help to broaden knowledge of who he was and what he did, is the publication of the diaries of George Q. Cannon by the Church Historian’s Press of the Church History Department of the Church of Jesus Christ of Latter-day Saints. This project, which has been underway for years, is finally nearing the online posting of the most interesting portions of his life: when he became a member of the First Presidency of the Church. I have drawn on these diaries, where appropriate, for information for Cannon’s chapter in my book, I Know He Lives: How 13 Special Witnesses came to Know Jesus Christ. The problem is that my book has had to go forward with printing and binding (in order to be released in September of 2017), before the final installments of the diaries have been made available to the public.

For over a century, President Cannon’s diaries remained in the First Presidency’s vault, where they received little to no attention and became an item spoken of (by a few) in hushed tones, with regret that they were not available for study. Then not too many years ago, they were transferred to the custody of the Church History Department, which also received permission to publish them in cooperation with President Cannon’s descendants. (For further information, see here and here.) I am informed that the publication team hopes to finish making all of the diaries available online by the end of July. This means that if there is anything in the diaries that Cannon wrote about his special witness, beyond what I have already found and included in my chapter, it will not be able to be included in time. Perhaps I can write an update someday, if such is necessary, on another blog on Cannon for this website.

It is anticipated by myself and many others, that because of the extraordinary features of the diaries, and Cannon’s position as a member of the First Presidency, that the diaries will contain excellent historical detail, some of which may not be very well known now, but will be made clearer as the diaries are posted. For an example of some diary material that has already deepened our historical perspective, see here, for entries dealing at length with the question of reorganizing the First Presidency in President John Taylor’s day, after the death of President Brigham Young.

The chapter in my book, however, deals largely with President Cannon’s special witness of Jesus Christ, as obligated by his calling as an Apostle. President Cannon is one among many who declared that he had seen and conversed with the resurrected Jesus, as one man speaks with another. He also declared that he had seen God the father and had heard the voice of the spirit personage of the Holy Ghost talking to him—much like the experience of the Book of Mormon Prophet Nephi speaking with the Spirit of the Lord (whom most church authorities agree was the personage of the Holy Ghost; see 1 Nephi 11:11). There are several documented sources which corroborate President Cannon’s testimony, declared with matter-of-fact clarity, surety, and power. He had seen and heard and he knew whereof he spoke.

The most trying times of President Cannon’s life were his missions to the Gold Fields of California (Sutter’s Mill), the Hawaiian (then Sandwich) Islands and to Washington as a lobbyist for the Church trying to allay anti-Mormon sentiment in Congress as a delegate from Utah Territory. Also his tenure as a member of the First Presidency, when his financial decisions contributed to the indebtedness of the Church and caused some of his apostolic associates to feel resentment over his “borrow to invest” policies. It was during these severely trying times of his life that Elder/President Cannon sought the Lord with the most pure and fervent faith, and that some observers/historians feel was when the Lord Jesus chose to appear and visit with him, strengthening him in his ordeals. Many believe at least one instance occurred while he served his mission in Hawaii.

For all of these sources and testimonies in context, see my chapter about President Cannon’s special witness of Jesus in I Know He Lives: How 13 Special Witnesses came to Know Jesus Christ.
at 12:21 PM