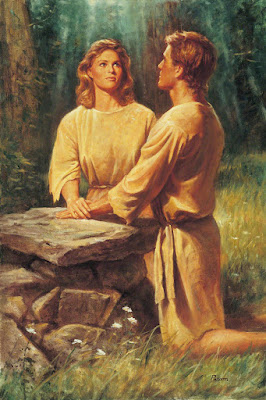 A recent example. A pro-evolution story covering a pro-evolution biologist’s pro-evolution speech at a symposium, where the biologist incorrectly stated that church members should believe in evolution—a blatant falsehood. Peggy falsely states: “The Utah-based faith takes no official stand on the question.” This is utter nonsense and I bet Peggy knows it. An apostle directly addressed her false statement three decades ago:

Twice the First Presidency has declared the position of the Church on organic evolution. The first, a statement published in 1909 entitled “The Origin of Man” (75–81), was signed by Presidents Joseph F. Smith, John R. Winder, and Anthon H. Lund. The other, entitled “ ‘Mormon’ View of Evolution,” signed by Presidents Heber J. Grant, Anthony W. Ivins, and Charles W. Nibley, was published in 1929 (1090–91). It follows very closely the first statement, indeed quotes directly from it. The doctrines in both statements are consistent and have not changed. One paragraph from the first will give you a feeling for their content.

It is held by some that Adam was not the first man upon this earth, and that the original human being was a development from lower orders of the animal creation. These, however, are the theories of men. The word of the Lord declares that Adam was “the first man of all men” (Moses 1:34), and we are therefore in duty bound to regard him as the primal parent of our race. It was shown to the brother of Jared that all men were created in the beginning after the image of God; and whether we take this to mean the spirit or the body, or both, it commits us to the same conclusion: Man began life as a human being, in the likeness of our heavenly Father (“The Origin of Man).

Statements have been made by other presidents of the Church and members of the Quorum of the Twelve Apostles which corroborate these official declarations by the First Presidency.

I should take note of one letter signed by a president of the Church addressed to a private individual. It includes a sentence which, taken out of context, reads, “On the subject of organic evolution the church has officially taken no position.” For some reasons the addressee passed this letter about. For years it has appeared each time this subject is debated.

Letters to individuals are not the channel for announcing the policy of the Church. For several important reasons, this letter itself is not a declaration of the position of the Church, as some have interpreted it to be. Do not anchor your position on this major issue to that one sentence! It is in conflict with the two official declarations, each signed by all members of the First Presidency. Remember the revelation in the Doctrine and Covenants, “Every decision made by . . . [the First Presidency] must be by the unanimous voice of the same; that is, every member . . . must be agreed to its decisions . . . . Unless this is the case, their decisions are not entitled to the same blessings which the decisions of a quorum of three presidents were anciently, who were ordained after the order of Melchizedek, and were righteous and holy men” (D&C 107:27, 29). (click for reference to Elder Packer’s talk.)
There is not one member of the current First Presidency and Twelve that believes in evolution. They believe that God created the earth and man and that he did NOT do it through an evolutionary process. It is deeply disingenuous for Stack to state what she did, unless she is uninformed, in which case she is also incompetent. But I rather think it is more a case of ignoring truth in an effort to persuade uninformed people to accept her agenda and views.

She also wrote: “it [evolution] has been taught at LDS Church-owned BYU for decades.”

But so what? It is true that academic freedom, espoused and championed by BYU, has allowed tenured professors at BYU to teach evolution as an academic subject. However, many false philosophies of men are taught by good professors and instructors at BYU as part of legitimate academic and educational pursuits. The vast majority of education at BYU has nothing to do with scriptural and doctrine. It is a place to prepare students for the employment market and a better life. Where the false philosophies of men, such as the historical biological sciences evolutionary theorizing, contradict the scriptures and teachings of modern prophets, the later prevail in matters of personal salvation, not the former. Yet the former are still taught legitimately as academic subjects at Mormon educational institutions because they are legitimate academic educational institutions, not Church-curriculum-approved Sunday School classes. When trouble arises is when students, and other people, don’t understand the difference between standard university educational instruction of all kinds (both true and erroneous) and eternal spiritual truths. BYU is not now and never has been a doctrinal spokes-institution for the Church. Nor is BYU-Hawaii, BYU-Idaho, UVU, or any other educational institution. As noted, the highest church leaders have spoken for themselves and the Church as an institution on the subject.

Stack’s shifty, cunning, purposes need to be called out and clarified: she is furthering an extremist liberal agenda in many of her (alleged) news stories, and of pro-evolution in this inaccurate piece. If Stack wrote it about Mormonism, it’s wrong. What a sad and sorry thing to use such a prominent voice for—to criticize and mischaracterize instead of strengthening and supporting and unifying. One distant day we will all be held accountable to God for what we do to persuade others to believe something; I am so very glad I am not in her position, with her past record.

Since this is God’s church, it will not change its stance on all those social (really moral) issues that Stack is pushing for change on. Gay sex will always be immoral and seriously sinful, as will gay marriage, which is rank apostasy. Women will never be ordained to the priesthood in mortality. Abortion, as the Church has defined it, will always be wrong; so will fornication and adultery. The telestial world we live in has no morals and will always bully and criticize and slander and hate the Church for holding firm and strong against sin, but truly faithful members will always know better and be loyal to the Lord.

I deliberately state and define “truly faithful” that way, because Stack and many other online commentators/activists/agitators, who have Stack’s same foolish agenda, have stolen and abused the word “faithful” to apply it to LGBT activists and extremist feminists and others who are certainly NOT “faithful.” But using the word makes their cause sound better and it fools some people. People who agitate for changing the laws and ordinances and commandments of God are false disciples and sinners, plain and simple. They have excommunicated themselves, even if no formal action has taken place. They are now the aware but sinful blind leading the gullible blind, who then likewise become the sinful but unaware blind. What a merry line-up of lost souls walking around that has proven to be. What tripe!
at 9:22 PM