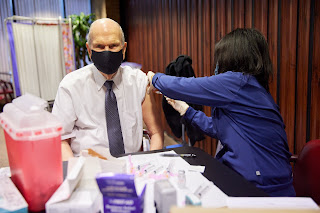 At this time when Covid 19 vaccination is being publicly debated, and when The Church of Jesus Christ of Latter-day Saints has just placed an official statement of policy in its handbook encouraging and recommending vaccination, I thought the below quoted item highly relevant.

In 1900 when Smallpox was the fearsome pandemic, vaccination was also the subject of strong public disagreement. At that time, President Snow had the below editorial published in the Deseret News. This item shows a consistency between that day and ours regarding this matter, though no one is ever forced to do anything. (At that time the Deseret News was considered the voice of the church, which it no longer is and hasn’t been for a while, although it is still a business entity owned by the Church). November 17, 1900, Deseret News editorial:

To the members of the Church of Jesus Christ of Latter-day Saints, Greeting:

The widespread feeling of fear and anxiety concerning the prevalence of smallpox in this city has caused us to advise that the Latter-day Saints college be closed for a short time, until the excitement is allayed concerning that institution of learning and others where people are in danger of exposure to this dread disease. We take this opportunity of suggesting to the people generally that they employ every precaution to prevent the spread of the contagion, by seeing to it that those who are or have been exposed exclude themselves strictly from public association with others, lest they be the means of communicating the disease. To the question of vaccination we have given careful thought and consideration; and our conclusion is that where care is taken as to cleanliness and purity of the vaccine matter, the treatment is beneficial, in that if it does not prove a preventative, it at least acts as a palliative, that is, it robs the plague of much of its terror by causing it to assume in the case of a vaccinated person, a lighter form. We are aware that there is a difference of opinion in the community as to the merits of this question; and, while we have regarded it largely as a matter of individual choice, we have felt reluctant to express ourselves publicly upon it. Now, however, we feel to publish the foregoing as our conclusion; and we therefore suggest and recommend that the people generally avail themselves of the opportunity to become vaccinated, using the utmost care to procure the services of those who are competent and will be conscientious in supplying only the purest virus that can be obtained. We feel in our minds justified in making this recommendation, and trust that it will be generally adopted. Signed: Lorenzo Snow and George Q. Cannon.