Editor's note: This is # 27 in a series of posts by Dennis Horne about collectible books. The introduction is here. 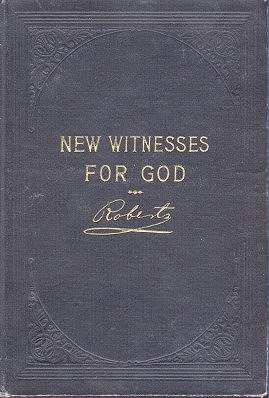 “From his days in the mission office in Liverpool, Roberts had the idea of writing a three-volume series on Joseph Smith and the Book of Mormon, treating them separately yet inseparable as witnesses for God. Now he began systematic organization of the material. His aide and assistant was once again John Whitaker:

‘During this time he often digresses and discusses many important doctrinal matters of great interest, and many secrets of his busy life. And it is interesting and inspiring to see his determination to leave a witness of the truth in so many ways. He told me of his trials and how hard it is sometimes to make adjustments. But he is leaving a witness in his carefully documented historical writings and on doctrines that will keep his name fresh in the minds of Latter-day Saints for generations to come. He is very painstaking, exact and accurate and states facts as they are, without coloring or favoring this or that point. He says history must be accurate or it is of little value.’

“In July 1894, Whitaker recorded further work on the New Witness series and added, ‘He is doing wonderful work in writing on Church history and many other subjects, and he keeps busy all the time in the work of the Seventy.’

“It was arduous to continue research and writing, and at the same time carry a full work load of office interviews, committee meetings, and the weekend stake conferences, for which travel sometimes took three or four days….

“Completed in Roberts's thirty-ninth year, the New Witness series reflects his approach and grasp of the historical genesis of Christendom and of the restored Church. He does not defend the ‘character of the Latter-day Saints’ but rather the message of divine inspiration and the messenger, Joseph Smith. The series was offered as an alternative—the only one since Burton's City of the Saints, published in 1862—to the sensationalist treatments of Mormonism by ‘ghouls who have preyed upon the misfortunes of an unpopular people solely for the money or notoriety they could make out of the enterprise.’ Roberts appeals to the evidence for the genuineness of the Restoration in the abysmal character of apostasy—a theme he later expanded in his Outlines of Ecclesiastical History, in The Falling Away, and in many of his prepared sermons. Roberts's main thrust is that the precise tests developed and used to defend early Christendom from its critics are with even more efficacy applied to the restored Church. And the one criterion not allowed by Christian people who reject the Restoration is the only evidence that moves one from sand to rock: revelation” (Truman G. Madsen, Defender of the Faith, 214).

As to Roberts’ desire to have the Church endorse and promote the book, Elder Abraham H. Cannon wrote in his journal that “I was in the offices until 11 o’clock, when I went to my Circle [Quorum] meeting… at which there were present all of the Presidency, L. Snow, F. D. Richards, F. M. Lyman, J. H. Smith, H. J. Grant, J. W. Taylor, M. W. Merrill and myself; George F. Gibbs, clerk….  We then considered an application from B. H. Roberts to endorse his new book entitled A New Witness for God, which has been examined by a committee consisting of F. D. Richards, George Reynolds and John Jaques, and very highly approved by them.  It was decided to allow him to use the report of the committee in any way he may desire, but it was not thought [proper] for the Presidency and Twelve to endorse the publication. (Journal of Abraham H. Cannon, February 21, 1895.)
at 10:10 AM