Editor's note: This is # 29 in a series of posts by Dennis Horne about collectible books. The introduction is here. 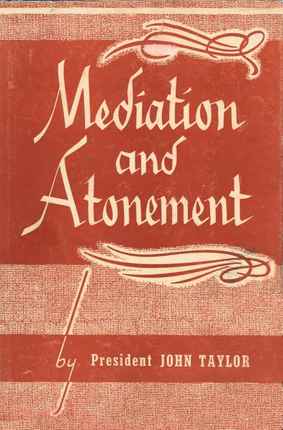 “President Taylor and his literary-minded secretary [George Reynolds] launched into a related but more ambitious project, that of tracking the scriptural passages on the atonement of Jesus Christ and the law of sacrifice in the Bible, the Book of Mormon, the Doctrine and Covenants, and the Pearl of Great Price. Most of the resulting book Mediation and Atonement, which saw many reprintings, is a compilation of scriptural passages, although there is important commentary as well. This was the first attempt by a Church president to write a theological treatise of any length or depth. Significantly, President Taylor and George Reynolds drew on the ‘Inspired Translation’ of the Bible, a product of Joseph Smith and Sidney Rigdon. This work, although Joseph Smith had intended to publish it, was not in print until 1867, when it was published by Joseph Smith III and the Reorganized Church of Jesus Christ of Latter-Day Saints. Brigham Young had not trusted this publication and refused to countenance anyone’s using it. But John Taylor was of a different mind and cited it frequently in his new book. Some of the commentary in Mediation and Atonement also bears the marks of George Reynolds’s unique literary style, thus suggesting an actual coauthorship or a ghost writing.”  As to how the actual writing President Taylor did with George Reynolds took place, “President Taylor dictated and George Reynolds drafted the copy” (Van Orden, Prisoner for Conscience Sake: The Life of George Reynolds, 120-21).
at 12:02 PM