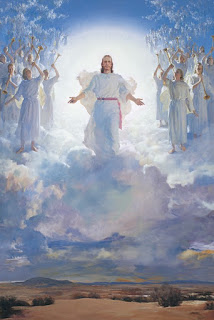 
Who are the 144,000 elect who will accompany the Savior when He returns to the earth as discussed in Revelations?  There has been much speculation discussed about it, but I have tried to limit my answers to recognized authorities, prophets and apostles.  I have tried faithfully to assemble answers that address who, what, where, and why.  For obvious reasons, it is impossible to answer when.  Each of these has been addressed, by section, from recognized sources:

A.    Who are the 144,000?:
(The 144,000 are) a select group of individuals. John foretells of 144,000 righteous high priests, all of whom have honored the law of chastity, who will receive a special ordinance. (See Rev. 7:3-4; 14:3-4; D&C 77:11.) These 144,000 will be organized into groups or quorums of twelve thousand each according to the twelve tribes of Israel. (See Rev. 7:4-8.) As of the middle of 1992, there were over two hundred and fifty thousand ordained high priests within the Melchizedek Priesthood. It is uncertain, however, how many of them would spiritually qualify for this ordinance and be physically able to fulfill the tasks and callings that await this group when they are called to administer the everlasting gospel throughout the earth. (See D&C 77:11.)  Also, it appears that these 144,000 might be gathered from the actual scattered Israelite tribes. (See D&C 77:9.)

B.  How will they administer to the people of the Earth?:
Depending upon the earth's population when the Millennium is established, each of these 144,000 high priests could have responsibility for many thousands of people. For example, if the earth population were only three billion, there would be over twenty thousand people for each of the 144,000.  In other words, they could be like Regional Representatives (or Area Authority Seventies) today, with responsibility over a number of stakes and the nonmembers living in that region. With the dramatic change of political and social events in eastern Europe and , perhaps great numbers of converts and priesthood holders in these areas will help supply this body of leaders needed to help the Messiah govern his kingdom on earth. (See D&C 133:18.) (emphasis added)
Excerpts from:  Principles and Practices of the Restored Gospel
Victor L. Ludlow  Chapter 37, The Signs of the Times

**INTERESTING NOTE:  Elder Bruce R. McConkie further identifies these 144,000 High Priests as those who have had their calling and election made sure and the gathering of these 144,000 has already begun to occur:

On 4 February 1844, Joseph Smith commented regarding the 144,000:  "I attended prayer-meeting with the quorum in the assembly room, and made some remarks respecting the hundred and forty-four thousand mentioned by John the Revelator, showing that the selection of persons to form that number had already commenced." He explained: "There will be 144,000 saviors on Mount Zion, and with them an innumerable host that no man can number.  Oh! I beseech you to go forward, go forward and make your calling and your election sure."

C.  What are we to understand by sealing the one hundred and forty-four thousand, out of all the tribes of Israel—twelve thousand out of every tribe?:

We are to understand that those who are sealed are high priests, ordained unto the holy order of God, to administer the everlasting gospel; for they are they who are ordained out of every nation, kindred, tongue, and people, by the angels to whom is given power over the nations of the earth, to bring as many as will come to the church of the Firstborn." (D. & C. 77:11.) See Rev. 14:1-5.

D.  What will the 144,000 be doing?:
It appears that this 144,000 will have a special missionary assignment. President Joseph Fielding Smith wrote: "This certainly is a great honor to be one of the 144 thousand who are specially called by the power of 'the angels to whom is given power over the nations of the earth,' to bring souls unto Christ.  John the Apostle had the great desire to bring souls to Christ.  Three of the Nephite disciples likewise sought this great honor and it was granted to them.  It is one of the noblest desires that a man can have. It will be a wonderful blessing to those who are called in this great group." (CHMR, 1:302.)

The Prophet Joseph Smith referred to the 144,000 as "saviors on Mount Zion" and added they would be accompanied by "an innumerable host that no man can number." (HC, 6:365.)

E.  Where will they appear?:
Regarding the location of the "" where they will appear, Elder Bruce R. McConkie has written:
All of the references to Mount Zion which talk of the Second Coming and related latter-day events appear to have in mind the new Mount Zion in Jackson County, Missouri. Thus we read [in D&C 133:17-18]: "Prepare ye the way of the Lord, and make his paths straight, for the hour of his coming is nigh—When the Lamb shall stand upon Mount Zion, and with him a hundred and forty-four thousand, having his Father's name written on their foreheads."
It seems clear that the Lord and his exalted associates shall stand in glory upon the American Mount Zion, although it may well be that in his numerous other appearances, including that on the Mount of Olivet, which is itself but a few stones' throw from old Mount Zion, he shall also be accompanied by the 144,000 high priests, "for they follow the Lamb whithersoever he goeth." [Revelation 14:4.] (DNTC, 3:525-26.)

F.  How will the Savior deploy the 144,000?
(See answer B above) However, Elder Bruce R. McConkie has said that just how the Savior will deploy this force of 144,000 special emissaries remains to be revealed. It seems obvious that because of the "innumerable host" that will accompany them, missionary work will move forward with great zeal among those who escape the wrath of God when the world as we now know it comes to an end.

Excerpts from Behold, I Come Quickly: The Last Days and Beyond
Hoyt W. Brewster  Chapter 21, The Savior Comes Again
at 12:09 PM