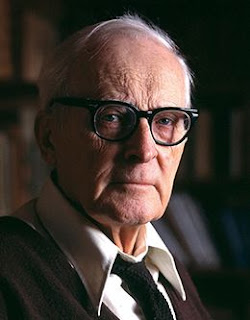 The below text quotes a letter written by Nibley to an editor of the Improvement Era that rejected an article he wrote for publication therein:

Actually there is an enormous accumulation of factual information refuting the claims of the evolutionists, or at lease casting serious doubts upon them. Maybe the stuff is no good, but we will never find out by forbidding all mention of it. We may put the age-old controversy (by no means the child of our Modern Scientific Age, as most people are led to believe) in the form of a dialogue:

A. Why do you undermine the faith of these young people?

B. To make them think! To get them out of the grooves!

A. But there are millions of things to think about. Why do you always emphasize the same half-dozen shop-worn commonplaces?

B. Because they are true! Truth at any price! All things must yield to the facts.

A. Bully for you! I could not agree more. And here are some facts to which I would like to call to your attention. Let us tell them to the students, and then they will think harder than ever.

B. No, No! You can’t do that! That will merely make trouble.

A. But you said truth at any price—that includes the price of much trouble.

B. I see no point to undermining scientific reputations; these things are agreed on by many important scientists—it would be foolish to question them.

A. But isn’t that exactly how science has made progress in the past? Who is in a groove now?

THERE ARE THOUSANDS OF PEOPLE OUTSIDE OF THE CHURCH TODAY BECAUSE OF SCIENTIFIC TEACHINGS WHICH HAVE BEEN EXPLODED, ARE NOW BEING EXPLODED, AND ARE YET TO BE EXPLODED, while the gospel remains unscathed.

With the Christian world in general the scientists have always had their way (not the other way around, as we have been taught), the whole history of doctrine being, as Whitehead points out, one “long undignified retreat” as year by year the churchmen since the third century have diligently accommodated their teachings to the science of the day. . . .

Brigham Young had the proper words for those intellectual Mormons who generously offered to place their great minds at the disposal of the Church and make the Gospel intellectually respectable: “O puss, what a long tail you have got!”

During the Darwin Centennial Year a great outpouring of articles took stock of 100 years of Evolution. I have a whole shoe-box full of notes taken from them. The dominant theme in these is that what Darwin really gave the world was not so much a particular explanation of how things came about as the fundamental awareness that however it happened it was entirely through natural and material means; whether this or that process produced the world around us is not the important thing, we are told over and over again, the important thing being to recognize that whatever the process, it was purely a mechanical one, the working of natural forces alone and unaided. The corollary of this, expressed with great heat and passion by scientists today as well as a hundred years ago, is that it is both unnecessary and pernicious to clutter up the picture with “supernaturalism.” G. G. Simpson, the patron saint of our local geologists, never ceases to harp on this theme; he equated God to Santa Claus in his dialectic, and then berates those immature souls who still believe in Santa. It is no accident that Marx wanted to dedicate his monument of dialectical materialism to Darwin—the key to both systems is their uncompromising materialism. But it was hardly an original discovery; where is the thesis better expressed than in the Book of Mormon? Korihor not only taught that “every man fared in this life according to the management of the creature,” but urged the people to give up their absurd belief in Simpson’s Santa Claus, “the effect of a frenzied mind.” Again it is Brigham Young who states the issue with characteristic clarity and brevity: “Instead of considering that there is nothing known and understood, only as we know and understand things naturally, I take the other side of the question, and believe positively that there is nothing known except by the revelation of the Lord Jesus Christ, whether in theology, science, or art.” You cannot reconcile those two views because they look in opposite directions. . . . .

A common pitfall in reconstructions of the past is the illusion that if one had explained by a proper scientific method how a thing COULD have happened, one has explained how it actually DID happen. The best scientists are guilty of this very unscientific thinking. We are allowed to say, “This is how it MAY have happened,” but never, “This is how it DID happen.” There are always unknown factors. “Fifty-seven years ago,” wrote Whitehead, “I was a young man in the University of Cambridge. I was taught science and mathematics by brilliant men and I did well in them; since the turn of the century I have lived to see every one of the basic assumptions of both set aside. . . . And yet, in the face of that, the discoverers of the new hypotheses in science are declaring, ‘Now at last, we have certitude’—when some of the assumptions which we have seen upset had endured for more than twenty centuries.” It is easy and pleasant to show off by talking about the subject one is presently working on, but to put it in the category of eternal truth is inexcusable. . . . The evolutionary hypothesis from the beginning had this merit; its proponents boldly set forth certain propositions, confidently predicting the outcome of certain experiments. Many of these experiments were carried out, with results diametrically opposed to those predicted. What did the experts do? Did they apologize for their presumption? Did they admit that there might be a flaw in the hypothesis? Not a bit of it! With the greatest of ease they contrived new interpretations of the data that proved that the outcome of the experiments, though it was the reverse of what was predicted, proved the validity of the original hypothesis instead of refuting it. Such men can’t lose. . . .

I begrudge no man his model or the corner of the floor he is playing on. But when anyone insists that he knows from his model alone exactly how the entire jigsaw cosmos will look when it is completed, it is time to protest. That can be known only by revelation. The Lord has given us the Big Picture, but no amount of juggling the pieces in any one or any dozen disciplines can begin to give us the remotest inkling of what the whole picture is like. The best we can hope for from that direction are man’s own hypothetical tentative constructions, and to present them as part of the Gospel is entirely out of order.

The words of the prophets cannot be held to the tentative and defective tests that men have devised for them. Science, philosophy, and common sense all have a right to their day in court. But the last word does not lie with them. Every time men in their wisdom have come forth with the last word, other words have promptly followed. The last word is a testimony of the gospel that comes only by direct revelation. Our Father in heaven speaks it, and if it were in perfect agreement with the science of today, it would surely be out of line with the science of tomorrow. Let us not, therefore, seek to hold God to the learned opinions of the moment when he speaks the language of eternity. (Nibley, The World and the Prophets, p. 134.)

The university has dictated doctrine and policy to every church that has sponsored it, and the churches of the world have listened to its voices only for a lack of a better guide. The true Church needs no such crutch to lean on. (Hugh Nibley Correspondence, July 29, 1960)