Editor's note: This is number 12 in a series of posts by Dennis Horne, sharing quotes from his book, Determining Doctrine: A Reference Guide for Evaluating Doctrinal Truth. You can read the first post here. The first part of each post is a new introduction, placing the quotes in context with contemporary issues. The quotes that then follow are from the Determinining Doctrine book, which contains many quotes that are not readily available elsewhere or are exclusive to the book. 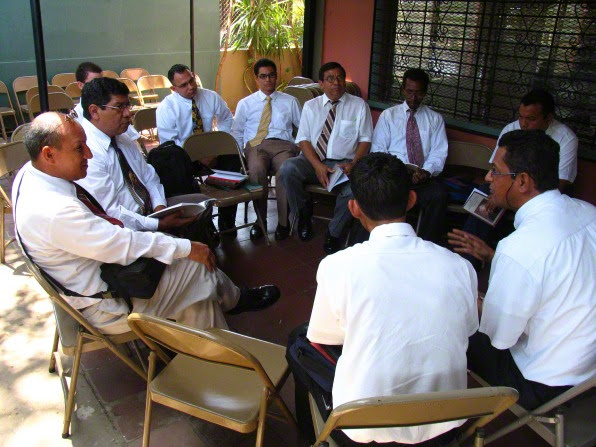 Critics seem to gleefully relish and misuse misstatements and misquotes from apostles and prophets, although there is no integrity in such tactics. Others purposely, or far more often, innocently misunderstand what was said and then spread the error. None of this helps with the accurate dissemination of truth or with building faith. We are all but human, yet we call all improve. One wise and experienced educator cautioned gospel teachers:

I know that most of you [teachers] are sincere and earnest and endeavor to give your best effort to teach the gospel of Jesus Christ as has been restored in these latter days through the Prophet Joseph Smith. I have known and observed some, however, who while being sincere were sometimes wrong or in error. If false doctrine or misinterpretation of scripture or prophetic statements is given, it is usually unintentional. Sometimes we misspeak ourselves. Sometimes our preparation is lacking. We attempt to instruct in ignorance, that is, “to wing it” maybe too often. There are occasions when we have been misinformed. Sometimes, however, we assume an expertise or authority for which we have not a right. All of these factors must be carefully accounted for along with our good intentions in fulfilling our responsibilities.

Aberrations or departures from truth always have a way of surfacing to the attention of others. Departures from the truth are made manifest in a variety of ways. There stands a host of witnesses of what we are about and what we say and what we do.

I might add that even internet anonymity will not shield one from accountability at the final judgment.

Some years ago I preached a sermon in this Tabernacle. At the close of the service, on my way home, between here and the Eagle Gate, six or seven men complimented me for “spanking [criticizing] in public” brother Abraham H. Cannon who had spoken just before I did. Two or three days later some seven or eight men were in the President’s office, and I was summoned before them and taken to task for “spanking” Brother Cannon. They were very angry. They were all Republicans, and all those who had complimented me were Democrats. Brother Abraham and I were there at this meeting, and I asked him if he knew that he was spanked. He said, no, he did not; and I remarked, “If I spanked you in public, I must have done it in my sleep. I quite frequently sleep when other people are talking; but, up to date, I have not learned to sleep while I am talking. I am not aware of saying one single, solitary word that reflected on what you said.”…

I requested that those two sermons be published in the Deseret News, one following the other; that neither Abraham nor I be permitted to read them before publication. When they were published I was to appear at the President’s office and I would make any apology that was necessary for spanking Brother Abraham in public. Brother Cannon and I read them to ourselves and then read them aloud, and we could not find one single, solitary word, wherein I had found any fault with what he had said, neither could the Presidency. So I did not have to apologize. (Conference Report, June 1919, 142-43.)

It is a very common thing for people to be misquoted. This applies with particular force to the general authorities. Almost everywhere I go, including almost every stake conference I attend, someone comes to me and says that at such and such a time and place I said such and such to them or to someone else. Now I ordinarily have no independent recollection as to what was said on the indicated occasion. In the great majority of cases, however, I am confident I would not have said the thing attributed to me. Very often the language and approach in the quoted material is such that I can identify it in my mind as having come from some other one of the brethren….

It is also not uncommon for a member of a stake presidency to get up in a general session of conference and say that Brother McConkie said such and such last night in the leadership session and in his recitation to totally and completely misconstrue and misquote what I had said. This matter of quoting the brethren falsely is of such general concern and creates such a problem that even the Church Handbook contains a statement that church members should not quote the Brethren where extravagant or unusual things are concerned unless they have the matter in writing. (Bruce R. McConkie Correspondence, 1968.)

The media have been kind and generous to us. This past year of pioneer celebrations has resulted in very extensive, favorable press coverage. There have been a few things we wish might have been different. I personally have been much quoted, and in a few instances misquoted and misunderstood. I think that’s to be expected. None of you need worry because you read something that was incompletely reported. You need not worry that I do not understand some matters of doctrine. I think I understand them thoroughly, and it is unfortunate that the reporting may not make this clear. I hope you will never look to the public press as the authority on the doctrines of the Church. (“Drawing Nearer to the Lord,” Ensign, November 1997, 4.)

Very often what is drawn from Church leaders of the past is…either misquoted, misrepresented, or taken out of context. Further, not everything that was ever spoken or written by a past Church leader is a part of what we teach today. Ours is a living constitution, a living tree of life, a dynamic Church (see D&C 1:30.) We are commanded to pay heed to the words of living oracles (see D&C 90:3-5). (“What Is Our Doctrine?” The Religious Educator, vol. 4, no. 3 [2003], 19.)

From time to time statements are circulated among members which are inaccurately attributed to the leaders of the Church. Many such statements distort current Church teachings and are often based on rumors and innuendos. They are never transmitted officially, but by word of mouth, e-mail or other informal means.

We encourage members of the Church to never teach or pass on such statements without verifying that they are from approved Church sources, such as official statements, communications and publications. Any notes made when General Authorities, Area Authority Seventies, or other general Church officers speak at regional and stake conferences or other meetings should not be distributed without the consent of the speaker. Personal notes are for individual use only.

True spiritual growth is based on studying the scriptures, the teachings of the Brethren and Church publications.

Quorum of the Twelve Apostles letterhead
To: Mission Presidents

We continue to receive reports of the distribution of a quote attributed to me which begins, “The youth of the Church today were generals in the war in heaven,” and ends with the statement that when they return to heaven “all in attendance will bow in your presence.”

The statement, on occasion, has been attributed to others of the First Presidency and Twelve. None of the Brethren made that statement.

We would appreciate your help on this matter.

Reference is made to your letter of January 11th addressed to President Smith in which you mention a discussion in an evening class at the BYU Center in Salt Lake City where it was reported that President Smith had said that “no LDS couple should have intercourse unless and only unless they are in hopes of conceiving.”

I am directed to tell you that President Smith has been misquoted on this subject. The Church has not taken any such attitude as indicated.

In regard to the second question, namely, the denial of temple recommends by a bishop to couples who have been practicing birth control, we would appreciate it if you would give us the name of the bishop who took this attitude, and the ward over which he presides.


Secretary to the First Presidency
at 11:49 AM