The Prophet will never lead the Church astray

Editor's note: This is the 7th in a series of posts by Dennis Horne, sharing quotes from his book, Determining Doctrine: A Reference Guide for Evaluating Doctrinal Truth. You can read the first post here. The first part of each post is a new introduction, placing the quotes in context with contemporary issues. The quotes that then follow are from the Determinining Doctrine book, which contains many quotes that are not readily available elsewhere or are exclusive to the book. 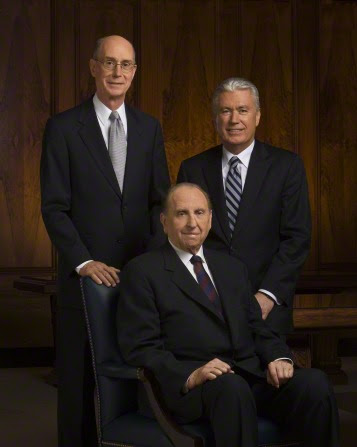 This is one of the most fundamental verities of the gospel; proof is found simply in the fact that the Church and its collective membership has not been led astray and is where it should be. Such assurance does not mean that the prophet is infallible or that he never makes mistakes or that they haven’t believed or taught something that proved erroneous once in a while—a situation more common in the earlier days of the Church than today. While various individuals are too-often lead astray, the Church itself continues operating and growing and spreading across the earth; all under the direction and priesthood keys of the President and Prophet, who moves forward under the direction of Jesus Christ, the Head of the Church.

Whether that prophet-president holding the keys of the kingdom be named Thomas S. Monson or Russell M. Nelson or Dallin H. Oaks, or some other now unguessed member of the Twelve, matters nothing. The greatest prophet of this dispensation has so declared: “The truth of God will go forth boldly, nobly, and independent, till it has penetrated every continent, visited every clime, swept every country, and sounded in every ear, till the purposes of God shall be accomplished, and the Great Jehovah shall say the work is done” (History of the Church, 4:540).

The Lord Almighty leads this Church, and he will never suffer you to be led astray if you are found doing your duty. You may go home and sleep as sweetly as a babe in his mother’s arms, as to any danger of your leaders leading you astray, for if they should try to do so the Lord would quickly sweep them from the earth. Your leaders are trying to live their religion as far as they are capable of doing so” (Journal of Discourses, 26 vols.  9:289).

There are men today, there will be men till the coming of the Son of Man, I expect, who feel as though they ought to lead the Church, as though it is not going on right—that this, that, and the other is wrong. I say to all at this day, I say to the whole world, that the God of , who organized this Church and kingdom, never ordained any President or Presidency to lead it astray. Hear it, ye Israel, no man who has ever breathed the breath of life can hold these keys of the kingdom of God and lead the people astray.—MS 51:546-547 (1889). (The Discourses of Wilford Woodruff, ed. G. Homer Durham [: Bookcraft, 1969], 72.)

Now, brethren, I think there is one thing which we should have exceedingly clear in our minds, neither the President of the Church, nor the First Presidency, nor the united voice of the First Presidency and the Twelve will ever lead the Saints astray or send forth counsel to the world that is contrary to the mind and will of the Lord.

An individual may fall by the wayside, or have views, or give counsel which falls short of what the Lord intends. But the voice of the First Presidency and the united voice of those others who hold with them the keys of the kingdom shall always guide the Saints and the world in those paths where the Lord wants them to be. (“Counsel to the Saints and to the World,” Ensign, July 1972, 88.)

You need never worry. You will always be safe as you follow the leadership of this Church. Individuals may go wrong. Even individuals in high places might falter, but there will never come a time when a majority of the leaders in this kingdom will go astray. You may be sure of that. (“Revelation,” Address given at the Brigham Young University Stake Conference, , 12.)

Yes, we believe in a living prophet, seer, and revelator, and I bear you my solemn witness that we have a living prophet, seer, and revelator. We are not dependent only upon the revelations given in the past as contained in our standard works—as wonderful as they are—but here in 1964 we have a mouthpiece to whom God is revealing his mind and will. God will never permit him to lead us astray. As has been said, God would remove us out of our place if we should attempt to do it. (“The Place of the Living Prophet, Seer, and Revelator,” Address to Religious Educators, ; cited in Charge to Religious Educators, 2nd ed. [Salt Lake City: Church Educational System and The Church of Jesus Christ of Latter-day Saints, 1982], 112.)

Think of the men who have presided over this church—Joseph Smith gave his life without hesitation, when the time came, but he had finished his work. The men who have succeeded him in the Presidency have possessed divine authority. Each of them in their turn has been criticized. Fault has been found with their ministry, but they have been servants of the Lord and he has recognized them, and they have lived long, useful lives, and have blessed the people….

He will not permit the men who preside over his church to lead the people into error, but he will sustain them with his almighty power. He will magnify them in the eyes of good and great men and women. He will bless their ministry and it will be fraught with success. Those who oppose and find fault will not find joy in their opposition. Those who criticize and seek to destroy the influence of the leaders of the Church will suffer the result of their wrongdoing. (Conference Report, April 1934, 29.)

The Holy Ghost truly leads into all truth. The Holy Ghost will not abide in an unworthy soul. The Holy Ghost forsakes those who are sufficient unto themselves and are not sincerely humble to receive the teachings of the Spirit. We must always believe in and follow the living prophets of God. They are His mouthpiece on earth and are inspired of Him to teach and direct all of us in righteousness and truth. No one will go astray if he follows the teachings and examples of God's anointed here on earth. People who criticize, find fault, and fail to support God's appointed leaders, lose the Spirit and fall into error and apostasy. All of us should be careful that we do not die with the former prophets. Many have and many will yet do so if they interpret from what they hear or read to their own selfish interests or desires. We cannot afford to die spiritually with any one of the prophets of this dispensation. The end result will be bitterness, sorrow, and loss of the Spirit, the only sure witness to bear record of truth and righteousness and to assure a peaceful, fruitful, and the abundant, happy life. (May 5, 1964, BYU Speeches of the Year, 1964, 5.)

I make you a promise, my dear brethren, that while I am serving in my present responsibility I will never consent to nor advocate any policy, any program, any doctrine that will be otherwise than beneficial to the membership of this, the Lord’s Church.

This is His work. He established it. He has revealed its doctrine. He has outlined its practices. He created its government. It is His work and His kingdom, and He has said, “They who are not for me are against me” (2 Nephi ). (Conference Report, April 2003, 65.)
at 11:51 AM