Editor's note: This is the second in a series of posts by Dennis Horne about collectible books. The introduction is here. 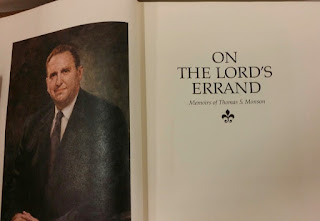 Perhaps the rarest and most expensive of the personal autobiographies by a high Church leader, this book wasn’t even known to exist by most of the LDS collecting world until after 2000. When it finally surfaced (after being privately published in 1985) it quickly created a demand for itself, especially when President Monson became the President of the Church. In 2009, when someone brought to President Monson’s attention the fact that a copy had just sold on the internet for $3,600, he joked that he “should have had more of them printed”, and observed that he had written it for family and close friends. As these friends age and then pass away, it is thought that a few more copies may eventually trickle their way into the rare LDS book market. However, it remains to be seen how this possibility— along with the issuance by Deseret Book of an official biography meant for public consumption—will affect its price and collector demand.

The fact that this work was not meant for public consumption had the fortunate consequence of allowing it to contain information that would otherwise probably have been removed. A small sampling of these items include the following:


Because the book was issued in 1985, it lacks coverage of President Monson’s multitudinous experiences since (which are covered in his authorized biography), but is still one of the better personal autobiographies to be written by a senior Church leader, with the fact that he became the President of the Church greatly adding to its desirability. Also, to date, it is the only book written by President Monson to have any strictly “collectable” value, since all his other works were printed and sold in such abundance as to eliminate the high-priced used market.