Editor's note: This is # 36 in a series of posts by Dennis Horne about collectible books. The introduction is here. 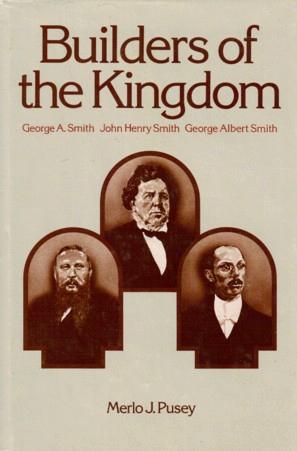 “In 1958 Mr. Pusey was considering requests that he write the biographies of several distinguished jurists when the children of George Albert Smith asked him to write this story. He responded to the request because he had warm memories of George Albert Smith from his days as a Deseret News reporter when he covered the LDS Church Office Building in the early 1920s. He found the journals of George Albert Smith and those of his father and grandfather to be both informative and delightful—full of trials and difficulties as well as joys and triumphs.” (Foreword, Leonard Arrington)

“I began working on the story in the late 1950s at the request of George Albert Smith’s two daughters, Emily Smith Stewart and Edith Smith Elliott, and his only son, George Albert Smith, Jr., then a professor at the Harvard University School of Business Administration. They made available to me the journals of all three of their distinguished progenitors and a vast array of letters, memoranda, and other data in George Albert’s personal papers. To supplement this information, I read widely in church history and interviewed an enormous number of church and civic leaders, friends of the family, and others who had had an impact on George Albert’s career. By this means I was able to obtain extensive information in the early 1960s that would not be available today [ca.1980]. Most of the original manuscript was written in those years, but publication was delayed in deference to objections from one member of the family to my treatment of some episodes with what I deemed to be proper objectivity. I have tried to tell the story as I found it, with lights and shadows, problems as well as achievements, and with candid reporting of controversy where it has existed. Recently the manuscript has been extensively revised in the light of historical research that was not available in the early sixties.” (Preface, Merlo J. Pusey)