Editor's note: This is # 39 in a series of posts by Dennis Horne about collectible books. The introduction is here. 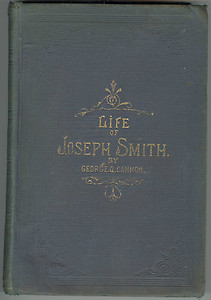 The authorship of The Life of Joseph Smith the Prophet has been the object of some debate. While the book bears only the name of George Q. Cannon, historical sources inform us that it was actually a collaborative effort within the Cannon family. The reason for dispute is that some historians have named Frank J. Cannon, a son of President Cannon, as the principal or “real” author. This is provocative because silvery tongued Frank Cannon often did not live the standards of the Church, bringing public shame to his highly prominent father, and after his (George’s) death, became a bitterly apostate anti-Mormon who travelled the United States giving lectures seeking to harm the Church as much as possible.

The journals of Cannon family members reveal that Frank wrote a rough first draft, but that it was extensively added to and revised by President Cannon and his sons Abraham H. and John Q. For example, one entry from President Cannon’s journal reads; “Friday, September 1, 1888. I worked very hard at the message of my ‘Life of Joseph.’” Other journal entries from President Cannon speak of his work on various chapters. A journal entry from Abraham Cannon reads: “I got his [G. Q. Cannon’s] consent to get John Q. to revise the ms. of ‘Joseph the Prophet’ which Frank prepared, after which Father and Joseph F. Smith will review it and we can then print the same.” President George Q. Cannon had final approval of the finished product. Each of these Cannon family members were literary men, often earning their living as editors and publishers of newspapers and books. A parallel might be drawn with today’s college professor, who produces a book with his own name as sole author, when in reality one or more assistants have substantially contributed to the research and writing. Obviously, as a practical matter, President Cannon’s name would help the book sell better than his less prominent children. President Cannon’s biographer, Davis Bitton, wrote, “Of course George Q. Cannon had the final right of approval and was responsible for the final product” (Davis Bitton, George Q. Cannon: A Biography, 296 and 511 n.140.

Also worth notice is the removal of a story found in the first and second editions (on pages 56-57), but not the third and succeeding editions published by Deseret Book. The story relates that when Martin Harris acted as scribe during a part of the translation of the Book of Mormon, he substituted a regular rock or pebble for the seer stone which Joseph may have occasionally used in his work. When Joseph could not then translate, Martin confessed his prank and returned the real seer stone to Joseph, who went on with the work. It is not known why it was removed, or who removed it, but the assumption is that the story may be of questionable historical authenticity. (Some twenty-six years ago when I first learned of this silent removal of text by the publisher, I wrote a letter to Deseret Book inquiring why the story was removed, but was ignored.)

The last third of the below letter written by President Joseph F. Smith is of some interest on the question of authorship:

… The lady who stated that Martin Harris apostatized over a pint of milk or striplings is entirely mistaken as to the identity of the person she accuses. It was stated and was generally believed that Thomas B. Marsh, the senior member of the twelve apostles, and at the time the presiding member, got vexed over a pint of striplings and allowed his passion to get so much the better of him that it finally led to his and his wife’s apostasy in the church, but no such thing as this ever happened with Martin Harris or either of the other witnesses to the Book of Mormon. The trouble with them was, they had endured so much persecution that they finally yielded so far to the spirit of the world as to claim that it was through the persistence of Joseph Smith, the Prophet, in the course marked out for him that persecutions came upon the church, and in this way they fell into the dark, and finally concluded that Joseph was wrong and had fallen and was leading the church astray, while they only were right, a very common condition for apostates. The History of Joseph Smith the Prophet by President George Q. Cannon was to all intents and purposes written by himself. It is true that Frank J. Cannon and perhaps John Q. assisted him in the clerical work of compiling the History, but it all passed through President Cannon’s hands, he dictating it, reviewing and revising it as any author would do. To this statement I am prepared to make affidavit if necessary, for I was with President Cannon during the greater portion of the time which he occupied in getting out this History.
With very kind regards, your brother,