by Dennis B. Horne

“There is no need to attempt to harmonize conflicting views when some of the
views are out of harmony with the Standard Works. This is what life is all about.
The Lord is finding out what we will believe in spite of the allurements of the
world or the philosophies of men or the seemingly rational and logical
explanations that astute people make.” Elder Bruce R. McConkie[1]

“Informed members of the Church know that when they come across statements or
doctrinal explanations which are contrary to what is in the revealed word, they are duty
bound to reject such.” Elder Bruce R. McConkie[2]

“I see others, [BYU Students] sharp, cynical, skeptical, in the know-it-all arrogance of blossoming young manhood and womanhood. They have inquisitive minds. They are easily taught—and easily led astray. Teach these with extra care.” Elder Boyd K. Packer[3]

I may be behind the news, but I recently learned, to my dismay, that some professors in the Brigham Young University Biology Department are actively promoting another attempt to harmonize evolution with the gospel. Such a misguided and possibly even spiritually dangerous effort must not go unchallenged and uncorrected.
I recognize and fully appreciate that BYU biologists must study and teach evolution for the school to be acceptable to the world as an accredited institution of higher learning. I also enthusiastically appreciate the almost inestimable value of the great majority of science for the betterment of the world.
What is not appreciated, and what is unacceptable, is when the theories of the historical life sciences are forced to mix with the gospel of Jesus Christ as found in ancient and modern revelation—specifically, the theory (or theories) of organic evolution. Round pegs just don’t fit in square holes without causing damage; in this case spiritual harm. Where this latest BYU movement loses its way, as with its predecessors, is in supposing it can harmonize evolution of any brand with revealed gospel doctrine. 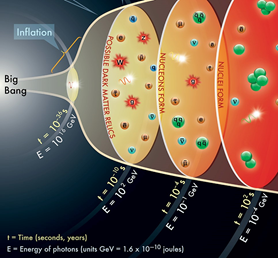 History of the Universe (Detail, cropped from original).
Credit: www.particleadventure.org
Article
Genesis 1: 1 – 2:
1 In the beginning God created the heaven and the earth.
2 And the earth was without form, and void; and darkness was upon the face of the deep. And the Spirit of God moved upon the face of the waters.
Without a basic understanding of modern cosmology and the scientific properties of light, any attempt to reconcile science and the biblical creation story is doomed from the start. The first chapter of Genesis is a metaphor for the creation of the universe, not an account of the creation of Planet Earth. That begins in Chapter 2. When we understand this the apparent anachronisms disappear and the creation story then agrees quite well with scientists’ “big bang” model.
We’ll return to Genesis in a bit, but since the Light of Christ underpins the entire universe, let’s start by discussing some of the properties of light. I’ll try to keep it as simple as possible without losing important detail.
Read more
at 2:48 PM No comments: