Correcting an Errant Perspective on the Restoration 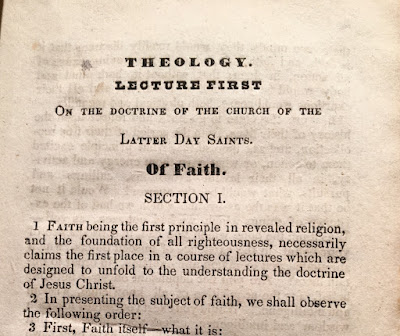 Some three years ago (2017), retired BYU professor Noel Reynolds gave an interview regarding his research about the authorship of the Lectures on Faith. While not all of his findings were convincing to me, I think the gist of his main thesis, that the Prophet Joseph Smith was not the main author of the lectures, is probably mostly accurate. His notions that they reflect the teachings of Sidney Rigdon who reflected the teachings of Alexander Campbell (an 1830s Protestant reformist), is less convincing to me (nor do I think we should assume Campbell’s teachings were all false). But much of Reynolds’ research seems to have some validity and therefore value, and such contributions, even if partially flawed, are generally welcome.
However, in one regard, he said some things in the interview that were not accurate and showed that he had not researched at least one portion of his presentation very well. This is not a big deal and I don’t overly fault him for missing the mark, but I have decided to take occasion to do some correcting. (Part of the reason I do so is because in the last year I have heard a couple of prominent names voice criticisms of Elder Bruce R. McConkie’s statements on certain matters where, again, they showed a lack of knowledge.) It is in regards to Elder McConkie’s views that Professor Reynolds showed some ignorance. This becomes more clear almost every time President Russell M. Nelson speaks to the Church about the ongoing status and future of the Restoration.
The issue at hand relates to what should be defined or categorized as part of the restoration of The Church of Jesus Christ of Latter-day Saints; more specifically, written texts. Professor Reynolds said: “He [Elder McConkie] seemed to have an enthusiasm that was fed by having more and more things [inspired writings] be part of the Restoration. I have to admit that I come from a different mentality, which is being skeptical and watching out for people who are trying to import things into the Restoration that really aren’t part of it.”
Read more
at 9:30 PM No comments: