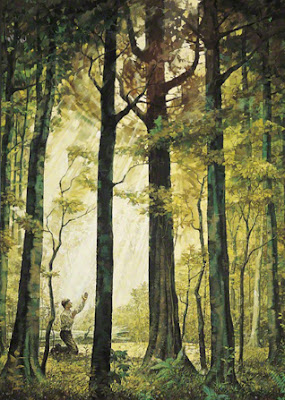 I felt a special spirit while looking at the beautiful scene in this window picture of a believing young boy in a sacred grove who made a courageous decision to earnestly pray to our Heavenly Father, who listened and responded lovingly to him.
Read more
at 3:10 PM No comments:

In the Sacred Grove with Prophets 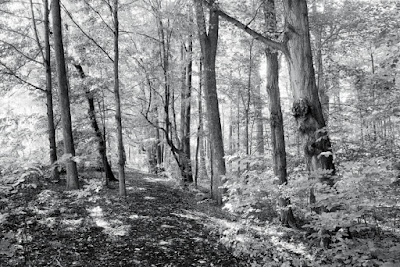 (Part four of a series compiled by Dennis B. Horne)

Following are accounts by General Authorities of choice experiences they have had in the grove of trees where Joseph Smith was visited by God the Father and His Son Jesus Christ:

In the Sacred Grove with Elder Spencer W. Kimball.

On Sunday evening [in 1962] following the Cumorah Stake conference, Elder [Spencer W.] Kimball asked if I would be willing to stay over and go with him to the Sacred Grove and the Hill Cumorah the next morning. Of course, I agreed.

It was a magnificent Monday morning. President Rossiter drove us out of the Joseph Smith home, and the three of us were joined by the caretaker, Brother Stephen R. Boswell. We then walked across the street and down the path toward the Sacred Grove. Elder Kimball used his pocket knife to cut a limb from a tree which he used as a walking stick as we moved along.

When we got to the Sacred Grove, we reverently entered and began talking in whispers. The caretaker told us there were only three trees left that were growing on the day of the first vision. The rest of the trees had sprouted since that most significant morning.
Read more
at 10:37 AM No comments: 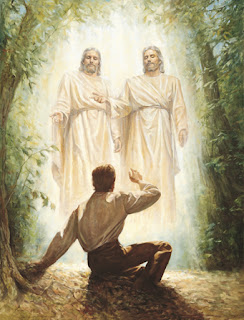 as prepared by Dennis B. Horne

Note: this narration is only of the prayer and vision, not other closely related matters. It contains descriptive material (not word-for-word) from the four main accounts originating with Joseph Smith. I put it together to show how they collectively enlarge our understanding by adding depth, breadth, and detail. One quickly understands why this vision is today viewed as the foundation of the Restored Church. Editorial commentary is in parenthesis:

Young Joseph looked around to ensure he was alone and then called upon the Lord for the first time vocally (having previously prayed in his heart). As Joseph began to pray, the devil exercised his power to stop Joseph’s tongue from speaking (vocalizing) and he heard noises like someone walking behind him (noises probably made by Satan). Joseph strove harder to pray but heard more walking noises behind him. He jumped up and looked around but saw no one. He felt surrounded by overwhelming darkness. He thought he was doomed to destruction and knew it was the power of the unseen devil at hand. Joseph again kneeled; his tongue was loosed and he called on the Lord in mighty prayer, and he was heard.

While praying, a pillar of light or fire brighter than the noon sun appeared above his head, descended, and rested on him. The instant that Joseph saw the light the devil left him. He was filled with the Spirit of the Lord and unspeakable joy (which means he was transfigured at this time so that he could abide the presence of God).
Read more
at 4:24 PM No comments: 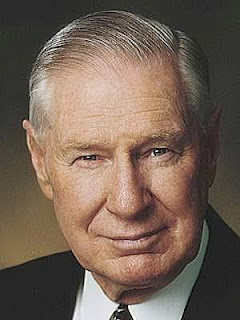 Young Joseph Smith, fourteen years of age, lived with his family near Palmyra, New York. In the spring of 1820, Joseph, like many others, was caught up in the religious excitement of the day. Desiring to know the truth for himself, and encouraged by the epistle of James, he knelt in solitary, fervent prayer in that beautiful grove not far from his home. He was at first violently seized by “the power of some actual being from the unseen world.” (JS—H 1:16.) In an effort to extricate himself, he exerted all his powers to call upon God for deliverance from this tremendous evil power. At this point he said:
Read more
at 7:55 AM No comments:

Some Unusual Perspectives on the Atonement of Jesus Christ 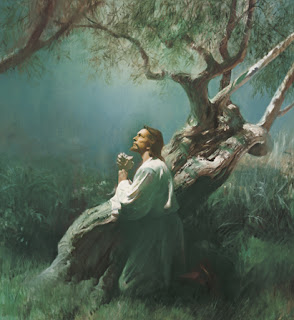 Below I examine some items related to the atonement of Jesus Christ. I forewarn readers that these are a little unusual, but are helpful to properly understand and have the right overall perspective when approaching them.

The first relates to some false doctrine that occasionally rears its head with fringe types or misled fundamentalists that are not members of The Church of Jesus Christ of Latter-day Saints. The second relates to what I have come to believe to be a meaningful clarification of doctrine, or at least doctrine that I have become satisfied within myself as to its correctness. The third relates to the issue of pain in the repentance process, something misunderstood by the world and dissident/extremist activist Latter-day Saints. We conclude with true teachings about the atonement by prophets.

We Will Not Atone for the Sins of Others

I hope I do not surprise anyone by noting that over the almost two centuries over which The Restored Church of Jesus Christ has existed, that there have been occasions when some members, and even leaders, have believed and taught false doctrine. It happens in the true church of Jesus Christ simply because it is made up of fallible mortal people who sometimes get things wrong, and of course, Satan tries to influence covenant making and keeping church members in particular; if he can fool an influential Latter-day Saint, he can cause much harm.[1]
Read more
at 7:27 PM No comments:

Some Doctrinal Teachings about the First Vision 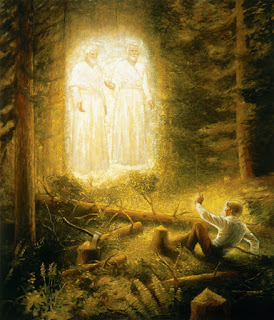 (Part two of a series compiled by Dennis B. Horne)

Occasionally, when the first vision is reviewed by church leaders, they may state some doctrinal insights, interpretations, defenses, or positions about various particulars. The below items mention some of these. The first is a comment (from a memo) from Elder Bruce R. McConkie, then a member of the First Council of the Seventy, about some wording in relation to the first vision, found in a book written by a member of the Quorum of the Twelve.

The second is self-explanatory and is Elder Bangerter using President Hinckley’s comments to illustrate his own views. The others contain further doctrinal insights:

You indicate that Joseph Smith communed with the Father and the Son “as one man speaketh with his friend.” This, or course, is what the record says that Moses did in talking to the God of Israel. I may be wrong, but I always assumed that this kind of communication meant that a man talked to God face to face with all his faculties. That is, it is the kind of communion that Joseph Smith had in the Kirtland Temple when the Lord appeared to accept the building. In the case of the First Vision Joseph, presumably, was in a trance; that is, he was unconscious. He came to himself after the vision was over. This view may, or may not be correct, it is just what I always have assumed this phrase meant.
Read more
at 10:17 AM No comments:

Comments on a Book Review of A Preparatory Redemption: Reading Alma 12–13. Edited by Matthew Bowman and Rosemary Demos (as published in BYU Studies Quarterly)

I realize that reviewing a book review, which this (sort of) is, is a little unusual. However, it is the best I can do since I refuse to read the actual book that was reviewed. I see such a read as a complete waste of time. More and more, as so-called “Mormon Studies” (the academic study of “Mormonism”) increases at the university level, we see books and articles being produced that purport to apply the training of the academy to the gospel of Jesus Christ. This is an exercise in futility at best and spiritual danger at worst. The things of God (His words) can only be understood by the Spirit of God. We now have another superb instance of proof that this is the case.

The latter half of Alma 12 and first part of Alma 13 are the Book of Mormon passages that receive intense academic scrutiny in this book, A Preparatory Redemption, issued by the Neal A. Maxwell Institute (still?!) attached to BYU. My comments on the book are necessarily restricted to the quotations and summaries from it and reactions to it found in the review, which the book’s authors and editors are not responsible for. Yet it appears to me that some conclusions can be reached. The discourse being covered is Alma’s teachings to the people of Ammonihah. The text includes quoted material from Alma, but is also part of a larger abridgment by Mormon.

The book reviewer, Charles Harrell, explains that the book’s introduction cautions that the essays in it should bee seen “as theological and speculative, rather than as definitive.” They are “clearly exploratory and experimental.” Right away we see that this book will have very limited appeal and use; after all, what good is experimental theology to Latter-day Saints who only desire revealed truth?. Only those who enjoy the specious speculations of others will want to read this material. Most people are seeking gospel truths, not academic speculation. We get “a diversity of perspectives” from scholars instead of attempts to glean gospel truths. The reviewer thinks much of it evokes “new and insightful ways of thinking about the text.” But is that what we really want, especially when they are readily acknowledged to be entirely speculative?
Read more
at 11:27 AM No comments: