Where did Joseph Smith get the Gospel?

Editor's note: This is the third in a series of posts by Dennis Horne, sharing portions of his book, Determining Doctrine: A Reference Guide for Evaluating Doctrinal Truth. You can read the first post here. 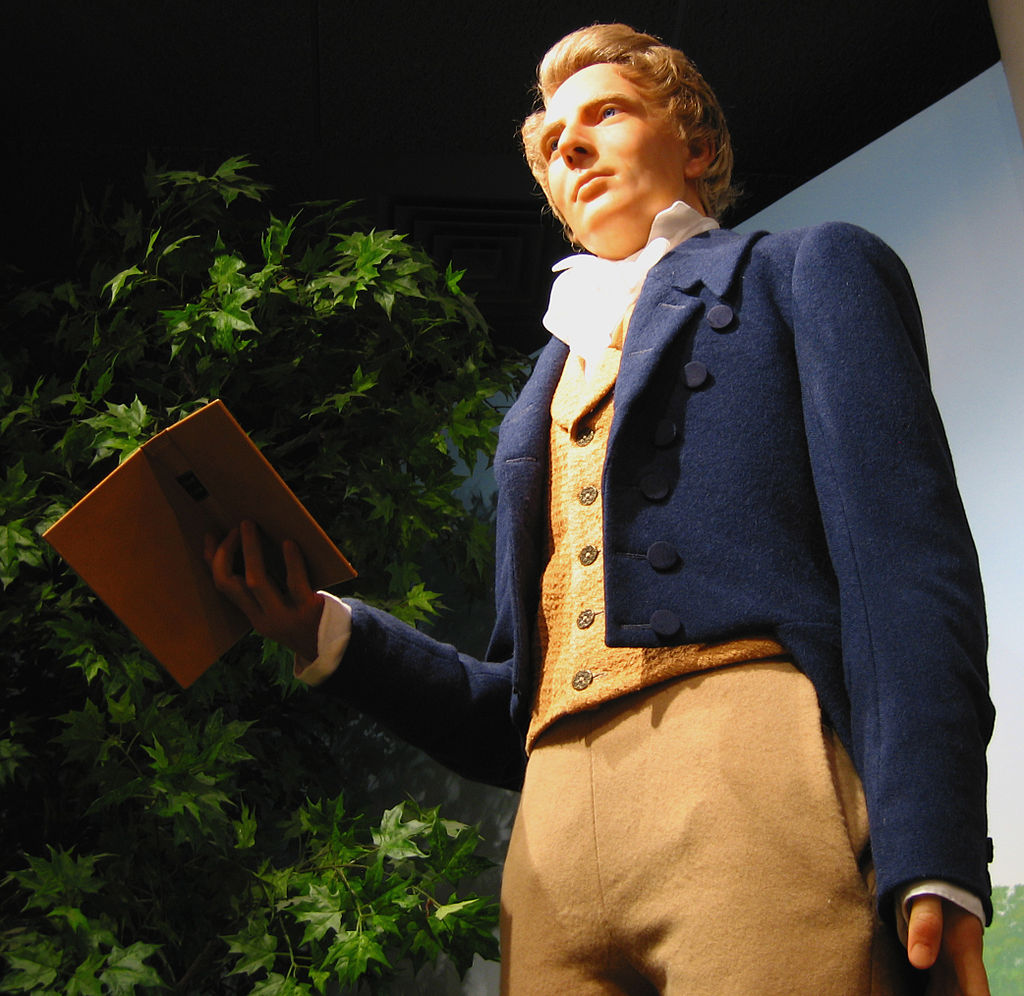 Some prominent educators today argue that Joseph Smith (because of his innate religious “genius”) got much of the gospel of Jesus Christ by recognizing and then adopting truths found in other Christian churches of his day. They say he then combined those borrowed doctrines with the priesthood keys that were given to him by angels. One of these educators wrote: “The grand project of restoration, then, relied upon a vision of apostasy as retreat and admixture, rather than absence. His task would involve not just innovation, or ex nihilo oracular pronouncements upon lost doctrines, but the salvaging, collecting, and assimilating of much that was mislaid, obscured, or neglected. I pause to make one all-important caveat which I can’t elaborate today: . . . Smith believed that apostasy did involve corruption beyond remedy of certain ordinances and covenants; and only heavenly transmission of authority could recuperate those essentials.” So states our learned professor.

Disagreeing with him are others (quoted below) of somewhat more orthodox and authoritative stature. The fact that various and sundry truths are found in other churches and religions should simply confirm their presence in the Bible and not delude us into thinking that such (other churches) is where Joseph got them from. These quotations should serve to dispel this academic mythmaking:

I will commence by saying, that the Church of Jesus Christ of Latter-day Saints has not grown out of the various religious societies that now exist, or that have existed, in Christendom; neither has it grown out of any of their institutions. Our Priesthood, our doctrine, our authority, the organization of our Church, and everything connected therewith, have been something revealed directly from the heavens. Perhaps you may inquire—"Have you not been guided more or less in relation to these principles by the book which is called the Bible?" I answer that, in the organization of the kingdom of God on the earth in the nineteenth century, we have been guided by the direct revelation to us from heaven. We do not profess that our doctrines and principles are entirely distinct and something entirely different from those which are recorded in the Bible, we are far from making any such profession; but we believe that the same God who organized his kingdom in ancient times, and revealed his will to the inhabitants of the earth, has revealed, in these last days, principles in accordance with those revealed in former times, and that he is a consistent Being, and that he would not communicate a Gospel for the inhabitants of the earth to observe in the 19th century that was not revealed and understood in former ages. The same Gospel, therefore, which God has revealed anew in our day, when compared with the Gospel contained in the New Testament, is found to accord in every principle, and in all its ordinances and institutions, with ancient Christianity. (Orson Pratt, Journal of Discourses, 26 vols. [London: Latter-day Saints' Book Depot, 1854-86], 18:42. Italics added)

The Church of Jesus Christ of Latter-day Saints is no partisan Church. It is not a sect. It is THE CHURCH OF JESUS CHRIST OF LATTER-DAY SAINTS. It is the only one today existing in the world that can and does legitimately bear the name of Jesus Christ and His divine authority. I make this declaration in all simplicity and honesty before you and before all the world, bitter as the truth may seem to those who are opposed and who have no reason for that opposition. It is nevertheless true and will remain true until He who has a right to rule among the nations of the earth and among the individual children of God throughout the world shall come and take the reins of government and receive the bride that shall be prepared for the coming of the Bridegroom.

Many of our great writers have recently been querying and wondering where the divine authority exists today to command in the name of the Father and of the Son and of the Holy Ghost, so that it will be in effect and acceptable at the throne of the Eternal Father. I will announce here and now, presumptuous as it may seem to be to those who know not the truth, that the divine authority of Almighty God, to speak in the name of the Father and of the Son, is here in the midst of these everlasting hills, in the midst of this intermountain region, and it will abide and will continue, for God is its source, and God is the power by which it has been maintained against all opposition in the world up to the present, and by which it will continue to progress and grow and increase on the earth until it shall cover the earth from sea to sea. This is my testimony to you, my brethren and sisters, and I have a fulness of joy and of satisfaction in being able to declare this without regard to, or fear of, all the adversaries of the truth.

If the world is to be prepared for the Second Coming, we must do it. No one else has the knowledge. No one else has the authority. The responsibility is ours. The last dispensation has welded together all of the doctrines and principles of the gospel that were advanced in former dispensations. We have the priesthood bestowed by heavenly hands. We have the restoration of the keys, conferred in the Kirtland Temple when Moses and Elias and Elijah came. We have all of the authority, all of the principles that are necessary for the great work of preparation; and ours, I repeat, is the sole responsibility to go forward and see that our mission is carried out. (J. Reuben Clark, Conference Report, October 1953, 39-40. Italics added.)

We understand the Bible better than any other people. It is not because we are smarter than they are. But we understand the Bible better than the rest of the world because of the new light we have received from heaven in modern times. This additional light is part of the new revelation of God which has been given to the Latter-day Saints. Just as Joseph Smith, after his first vision, knew more about the nature of God then the best–schooled clerics of the world, so we know more about the meaning of the Bible for the same reason.

No matter how bright other religious teachers may be, they do not have the light of revelation to guide them. They do not even believe in modern revelation. Therefore, we do not and cannot regard them as authorities in interpreting the doctrines of the Bible. They may do research on the history or the geography of the Holy Land and may know more about those subjects than the Latter-day Saints who have never made that kind of research. We are grateful for knowledge of that kind and believe that it may develop much useful information which can be very helpful to us when properly used.

Nevertheless, these men are not authorities on doctrine. We must not suppose they are, and we must not put their views on doctrine ahead of ours. Ours comes by revelation. Those men are not inspired. They may be ever so skilled in other things, but they are not to be depended upon as interpreters of the meaning of the doctrine of the scriptures.

Some may think we speak from a sense of egotism when we talk like this, but of course that is not so. It is simply a case of the wisdom of man versus the revelations of God. There is simply no comparison between their uninspired worldly-wise opinions and the actual word of God as given to us in modern revelation. We as teachers in the Church must teach the revealed word of God. We have no need for the uninspired conjectures of the clerics of the world concerning the doctrines of Christ. That is why we do not send our men to divinity schools. We do not encourage our men to go to these schools. We have had a few go and some have come back almost spoiled, so far as we are concerned, because they have brought back so much sectarianism with them that, as a matter of fact, their actual faith in some instances has been shaken. We do not encourage that. That is why we so much prefer our own training in the revealed word. If a man knows so little about God that he denies present-day revelation, can he be considered an authority on the teachings of God? (“Avoiding Sectarianism,” address to religious educators, 22 June 1962; in Charge to Religious Educators, 2nd ed. [Salt Lake City: The Church Educational System and The Church of Jesus Christ of Latter-day Saints, 1982], 114.)

Joseph Smith tells us that since the days of Adam the Gospel has always been on the earth somewhere preserved between the Dispensations by “holy men ye know not of.” Many people have claimed to belong to such lines—that is the Baptist “trail of blood theory.” In the teachings of the gospel John has a unique place: he is the only New Testament figure mentioned by name in the Book of Mormon, and Section 7 of the D&C is the translation of a scroll he hid up in the manner of the Qumran sectaries. The Masonic origins are particularly interesting because they go back to the Temple at Jerusalem. But so do a lot of other rites and societies, some of which are far nearer to the original version than the Masons. The problem is, of course, the line of authority. To recognize the existence of a true and unbroken tradition does not give me the right to claim it for myself. The Seventh Day Adventists, for example, recognize the importance of continuing certain ancient Hebrew practices—but who authorized them to take the burden on themselves? It is true that Peter was the Rock, the Seer Stone, but having said that I still have to prove any later ties to Peter. It is as if I were to claim Abraham Lincoln for a relation by proving beyond a doubt that he had delivered the Gettysburg Address. None of these people can connect themselves up with the ancient order—least of all the Masons—but Joseph Smith has given us that ancient order in great consistency and detail as it is being confirmed of hundreds of documents coming forth long after his mission was completed. (Hugh Nibley Correspondence, 1981.)
at 9:31 AM