Editor's note: This is # 23 in a series of posts by Dennis Horne about collectible books. The introduction is here. 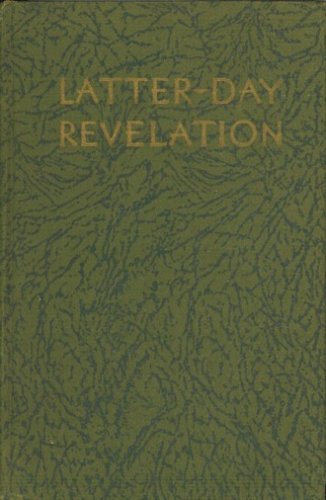 Few people today, outside of LDS book collectors and historians, have heard of this short-lived official church publication. In his article, “The Living Canon,” Richard O. Cowan explained: “In 1930 the Church published a volume containing extracts from the Doctrine and Covenants. Entitled Latter-day Revelation, this collection presented forty-one of the sections in whole or in part. It was only about one-third as long as the regular edition of the Doctrine and Covenants. The book’s preface explained that many early revelations dealt only with individual callings or with conditions which existed only at a particular time. ‘Except as illustrative instances of the Lord’s way of directly communicating with His prophets, many of these revelations, once of present and pressing significance, became relatively of reduced importance with the passing of the conditions that had brought them forth.’ Under the direction of the First Presidency, Elder James E. Talmage had the responsibility of preparing the selection, and much of his time on weekends during the later months of 1930 was devoted to this project” (Hearken, O Ye People, 26).

Further detail is found in Elder Talmage’s journal, which states: “[June 28, 1930] By prearrangement I sat with the First Presidency during the afternoon, and together we examined in detail the copy I had prepared for the prospective bringing out of a book containing extracts from the Doctrine and Covenants. The purpose of this undertaking is to make the strictly doctrinal parts of the Doctrine and Covenants of easy access, and to reduce its bulk, furthermore making it suitable for distribution by missionaries and for general use by investigators. Many of the revelations received by the prophet Joseph related to personal directions in temporal activities incident to the early years of the Church, the immediate importance of which was localized as to time and place. Part of my work in the immediate future will be the carrying of this book of extracts through the press.” A few months later he wrote: “[Sept. 13, 1930] Action by the First Presidency this day authorized procedure in bringing out the Doctrine and Covenants extracts along the lines recommended by the Council of the Twelve.”

He was also able to record—“[Nov. 22, 1930] I had the pleasure of presenting to the First Presidency advance copies of the little book ‘Latter-day Revelation’ which is described on the title page as ‘Selections from the book of Doctrine and Covenants.’ The selections were decided upon by the First Presidency and Twelve and the matter of arranging, editing, proof-reading, etc., has been under my immediate direction, and I must be held personally responsible for the correctness of the type and matter.”

On release of the book, a notice (probably written by Talmage) appeared in the Deseret News for November 24, 1930, clarifying that “In no sense is the new volume a substitution for the Doctrine and Covenants, which will be continued in publication as heretofore, but it comes as a welcome and convenient summary of many of the most important and impressive revelations, presented in attractive and readable style, so arranged as to make it easy to refer to the standard work for comparison and amplification when desired. ‘Latter-day Revelation’ will doubtless appeal to investigators in the mission fields, while it is equally desirable for home and class reading among the Latter-day Saints. Mechanically the book is strictly up to date and is a product of The Deseret News press and bindery, of which the establishment has good reason to be proud.” (A very similar review, written by Talmage, appeared in the June 1931 Improvement Era.)

Despite the good intentions and hopes of wide usage of Elder Talmage and Church leaders in printing this book of extracts, it did not catch on in the manner desired, and only one edition was issued—it seemed that Latter-day Saints consistently desired more revelations, not less. Also, issues of “bulk” have changed because of fine thin onion-skin paper and the triple-combination.
at 5:59 PM