Elder Melvin J. Ballard as a Special Witness of Jesus 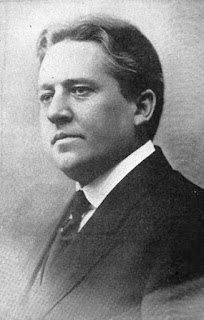 This brief review of the life and testimony of Elder Melvin J. Ballard (1873-1939) serves to introduce a more thorough and detailed chapter about him and his special witness of Jesus Christ as found in my forthcoming book (due out in September), I Know He Lives: How 13 Special Witnesses came to Know Jesus Christ. Elder Ballard is one of those witnesses.

Although Elder Melvin J. Ballard is not known to most Church members today, in his day he was known to the Church as great preacher and spiritual giant in the Church. In my opinion, he might be thought of today as something of a cross between President Gordon B. Hinckley and Elder Bruce R. McConkie, because he taught powerful doctrine with clear explanation and force.

Though brought up as a farmer, he educated himself with some higher learning, and then magnified his talents while serving missions for the Church. He eventually developed a reputation as a great singer and preacher, both useful gifts in missionary work. He spent most of his adult life on missions, both in the East of the United States, in the Northwestern States, in South and Central America, and as an Apostle.

Possessing great faith and Spirituality, he received many visions and revelations and performed many miracles, such as healing the sick and bringing wayward souls back to the fold. While serving as a mission president, and working with new members in a native American tribe, he sought the Lord in mighty faith for help and answers regarding how to solve some problems that had arisen. One night he received a powerful and extended dream in which he was introduced to and embraced the resurrected Lord Jesus Christ. This experience helped to qualify him to become a special witness of Jesus Christ. Because he spoke of it on several occasions, giving one degree or another of detail, we suppose he was given permission by the Spirit to do so. One of his hearers that was unusually impacted by the power of his testimony of seeing the Son of God was a young Marion G. Romney, who thereafter resolved to go on a mission.

Near the end of his life Elder Ballard served a short-term mission in South America, formally opening that country for the preaching of the gospel. After some time at home again, he was called on another even shorter mission to the Eastern United states, where despite worsening health, he persevered and made it home to Salt Lake City on the last of his strength.

His grandson, Elder M. Russell Ballard, spoke of his grandfather’s passing and of the good common sense advice he passed along just before he died:

In my office I have a little plaque that reads, “Above all else, brethren, let us think straight.” These were the last words in mortality spoken by my grandfather Melvin J. Ballard. As I understand the circumstance, Grandfather, after the very grueling experience of preaching the gospel all through the eastern part of the United States, drove his car from New York to Salt Lake City. When he came into the driveway of his home at 80 North Wolcott Avenue in Salt Lake City, he collapsed. He was rushed to the LDS hospital, where he was found to have acute leukemia. He never came out of the hospital. He went in and out of a coma. As I have had it told to me by my father, who was there, Grandfather pushed himself up in bed, looked into his hospital room as though he were addressing a congregation or a group, and said clearly, “And above all else, brethren, let us think straight.” Then he died. I don’t go into my office any day of the week that I don’t see those words, and I find that they help me a great deal.

As previously stated, Elder Melvin J. Ballard was known for his great doctrinal presentations, which he preached as though he were his mentor, Elder B. H. Roberts. Elder Ballard could hold an audience spellbound under the power of his doctrine and the Spirit that accompanied it. People travelled for miles around to hear him speak, and many of his sermons have been preserved. The most famous is “The Three Degress of Glory,” which spent decades in print in book or pamphlet form. Two biographies eventually appeared to chronicle his life, one drawing heavily on the other, but both coming up short of what could be desired.

Sprinkled throughout his addresses are incidences—nuggets—where Elder Ballard sometimes chose to share a spiritual experience. The chapter on him in my book, I Know He Lives: How 13 Special Witnesses came to Know Jesus Christ, contains many of those I was able to locate, as well as every instance I could find of his having shared his testimony of having seen the Lord Jesus. Elder Ballard’s testimony of that experience will continue to thrill humble and prepared readers.
at 12:10 PM