Lies, the Spirit of Discernment, and the Atonement of Jesus Christ: A Tribute on the Passing of Elder Vaughn J. Featherstone 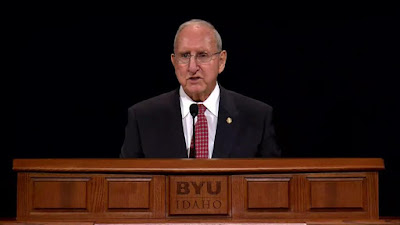 On the evening of May 11, I listened for the second time to a wonderful talk, “The Divine Gift of the Spirit,” given by Elder Featherstone at the BYU-Idaho devotional in 2013. I suppose it was one of his last major public addresses. The next morning, I learned that Elder Featherstone passed away at about the same time I had been listening. Knowing he was 87, I had wondered if his time was near.

The stories told and expressions given in that sweet talk and others have given me much to think about, some of it in an unusual context. I occasionally keep an eye on topics that enemies of the church discuss (including their foolish charges against the church and the Brethren) and I have found that a couple of items they like to harp on have to do with lying and the spiritual gift of discernment. I have come to understand that they often have a warped sense of what lying is.

For example, one bitter apostate said that he was told by his priesthood leader to keep something very sacred confidential. This apostate then complained that he was counseled to come up with some innocent statement he could use, in talking to others, to avoid giving away the confidence. Now that he had become apostate, he was shouting about the confidence, and charging his priesthood leader with telling him to lie to others. Of course such was not the case, but he was desperately looking to find fault. (The irony is that he would break the confidence, or lie, after becoming apostate, while calling others liars; go figure.)

I won’t take much space here to examine the question of who it is that defines what a lie really is, and that if we take the telestial world around us as our conscience, and if we get our definitions and standards from modern society, we will certainly have a different concept of things like truth, lies, morality, and right and wrong, than what the Lord teaches in His scriptures.

We should be getting our sense of right and wrong/good and bad, our conscience, from the light of Christ and the gift of the Holy Ghost, not from worldly voices. Generally, most Latter-day Saints are deeply moral and honest people; they simply shine with integrity like a light set on a hill before the world. But that doesn’t mean they view truth and right and wrong the way the world does.

If a high priesthood leader counsels someone to come up with a suitable expression to help them keep a confidence, even though they are not telling the full truth and there may be a little fudging or withholding in the expression, the Lord will honor it and not hold anything against the person. The scriptures tell us that the Lord has told prophets to tell falsehoods to others, or to withhold the full truth, to accomplish His purposes and protect His servants. Anti-Mormons just can’t stand that fact: that the Lord is the author and giver of truth; that because He is the author of spiritual law, he can work within and alter that framework as He pleases; that the devil can pervert and corrupt and warp truth and lies and get people sorely mixed up (the state of the enemies of the church.)

This brings us to Elder Featherstone’s choice talk. In it, he tells a somewhat detailed story of how a righteous and faithful woman was prompted to tell a lie to some evil, vile, men, in the very act of trying to kidnap her little daughter. The little Spirit-prompted lie had the immediate effect of foiling the kidnapping and probable sexual molestation attempt, saving the little girl from probable attrocities. (Listen here, from 19:14 mins to 23:22; Elder Featherstone told that store several times at BYU-Idaho in varying degrees of detail; this is the most complete that I have heard.)

Sour-souled/minded anti-Mormons want to decree that sweet faithful woman an evil liar; how little do they know and how wrong they are. God is both the law-giver and the judge and He will do as He pleases with His children.

This brings us to the subject of the gift of the Spirit known as the spirit of discernment. While anti-Mormons are calling various church leaders liars, both prophets/apostles and local leaders like bishops, they themselves are often the deceivers. Many of them brag online about being in the closet at church; where they are using deceit to fool people into thinking they are believers. They sometimes go in and lie to the bishop, then ridicule that bishop online in a chat forum for supposedly not having the spirit of discernment to detect their lies. Such irony, or should we say hypocrisy: liars mocking others for not detecting their lies.

Yet despite such underhanded and deceptive works in the dark, performed by wicked people, there really is a gift of discernment found among the scriptural lists of the gifts of the Spirit, and among the faithful it is occasionally exercised—a gift used when given, which is certainly not all of the time; it is not automatic, subject to demand, nor an electronic lie detector test. D&C section 10:37 tells us that the Lord will not always give His servants that gift, but when he does, it can be marvelous and helpful.

Elder Featherstone shared two such experiences from his own ministerial experiences in another wonderful BYU-Idaho devotional talk, this time in 2006. Listen here, 37:45 mins to 40:18. I strongly encourage readers to listen closely to Elder Featherstone’s counsel given in that talk segment. The reason will be instantly apparent to anyone paying attention to the recent media stories about a former MTC president and accompanying lawsuits and anti-Mormon harping on the situation. Further, anyone who has been sexually abused would do well to listen to his tender counsel at 29:00 to 32:09, reviewing the story of healing that a sexually abused woman found in the inspired words Elder Featherstone spoke, and as the power of the atonement of Jesus Christ entered her life and healed her; also here, 18:50 to 19:45, where he states that the atonement covers/heals the innocent victims of incest and other like horrific traumas. What deeply precious doctrine!

In this talk, from 16:10 to 19:00, Elder Featherstone goes into some detail discussing the events of the actual atoning sacrifice of Jesus in the garden of Gethsemane, and teaches what might be thought to be somewhat new doctrine, or at least doctrine that I hadn’t heard before (maybe others have), relating to the separate periods of inexpressibly intense suffering Jesus endured while praying, between His remonstrances with the sleeping apostles. Elder Featherstone himself recognizes that he believes his doctrine to be reasonable, but does not insist it is more than his opinion. He felt Jesus suffered for the sinful guilty first and most intensely, when he sweat drops of blood from his pores during his prayer; then when he prayed the second time and suffered, it was for the victimized innocent. While I had not heard this doctrine before, I think it worth pondering because Elder Featherstone thought it worth pondering.

Lastly, and changing the subject, I thought it also deeply touching to hear Elder Featherstone, in 1973, having been a general authority (a counselor in the Presiding Bishopric) for only about a year, speak with a prophet’s insight about the-then president of Rick’s College (today BYU—Idaho), Henry B. Eyring (now a counselor in the First Presidency). In this talk, (16:00 to 16:41) Bishop Featherstone said the following about him: “He is one of the great men of the earth . . . you see, he doesn’t even know who he is [going to become] yet. . . .” After that, we jump forward to the talk Elder Featherstone gave in 2013 (this talk, 13:20 to 13:52) where he references how the Spirit told him Henry Eyring would be called to the Quorum of the Twelve before it happened, on the very occasion in General Conference of 1995.

Anti-Mormons can’t comprehend the sweet and special workings of the Spirit. This valiant and faithful man, Elder Featherstone, knew whom he served and testified of Him. I have loved to learn from Elder Featherstone’s recorded faith-affirming, edifying talks and listen to his faith-filled testimony. Perhaps he may have had to curb his forthrightness of expression and declaration in today’s extra-sensitive politically correct environment, but perhaps not; he wasn’t much good at tickling ears and telling people what they wanted to hear, but he was great at using true stories to teach important gospel principles, and at using scripture and the teachings of the prophets and apostles to teach sweet doctrine. God bless his memory, now that he is gone!