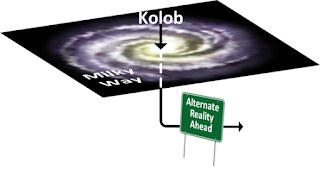 Kolob is the Supermassive Black Hole “Sagittarius A*.” Source: Author
Article
Abraham 3:2-10 is scientifically correct in terms of modern galactic astrophysics and General Relativity. Yet Einstein did not publish his seminal paper on General Relativity until 1915, 73 years after first publication of Abraham’s revelation. No one alive in Joseph Smith’s day could have known anything about Relativity’s predictions of black holes, Einstein-Rosen bridges (AKA wormholes), and the warping of time and space (time dilation), except by revelation. Yet there it is, in the first few verses of the chapter!