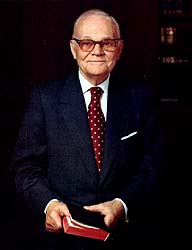 One Saturday I went to the University of Sydney and spent the afternoon in the library. When I got tired looking in the books, I sat down at a table with my Doctrine and Covenants and read the 76th Section where the Lord talks about the three degrees of glory and so forth. As I read it, I got tremendously interested, and when I finished and got up to go, it was dark. As I stepped outside and down the steps of the library building, I looked into the heavens and saw the stars in that southern sky, the Southern Cross and other constellations. They seemed unusually bright. As I gazed into the heavens and walked across the lawn to the street, I seemed to see the things I’d been reading about. That experience had such an effect on me that never since then have I been able to find complete satisfaction in any work other than the work of the Lord.

I don’t know that I remember when I didn’t have a testimony, but this experience gave me an emphasis that I’ve never forgotten. From then on, even though I did many things, practiced law for example and received a great deal of satisfaction in winning lawsuits and doing other things, I didn’t ever feel that I could give them my full wholehearted devotion.[1]

Elder Boyd K. Packer remembered hearing Elder Romney explain his Australian experience: “Some years ago, I was with President Marion G. Romney, meeting with mission presidents and their wives in Geneva, Switzerland. He told them that 50 years before, as a missionary boy in Australia, late one afternoon he had gone to a library to study. When he walked out, it was night. He looked up into the starry sky, and it happened. The Spirit touched him, and a certain witness was born in his soul. He told those mission presidents that he did not know any more surely then as a member of the First Presidency that God the Father lives; that Jesus is the Christ, the Son of God, the Only Begotten of the Father; and that the fulness of the gospel had been restored than he did as a missionary boy 50 years before in Australia. He said that his testimony had changed in that it was much easier to get an answer from the Lord. The Lord’s presence was nearer, and he knew the Lord much better than he had 50 years before.”[2]

President Romney said: “I know that God lives and that Jesus Christ lives. I shall not be more certain when I stand before them to be judged of my deeds in the flesh. The Holy Ghost has revealed these truths to me. I know that God can hear prayers; he has heard mine on numerous occasions. I have received direct revelation from him. I have had problems that did not seem to have a solution, and I have suffered in facing them until it seemed that I could not go further if I did not have an answer to them. After much praying, and on many occasions fasting for a day, a week, over long periods of time, I have had answers revealed to my mind in finished sentences. I have heard the voice of God in my mind, and I know his words.”[3]

Hearing the voice of God in his mind was one of Marion G. Romney’s greatest spiritual gifts as a special witness, and he spoke and testified of it often. In a 1961 General Conference address, he stated: “I know, for example, what Enos was talking about when he said, ‘the voice of the Lord came into my mind again, . . .’ He did not say it came into his ear, but that it ‘came into my mind again, saying. . . .’ I know what that voice is like, because I have had it come into my mind and give me names when I have had to select stake presidents. There is nothing mysterious about it to people who learn to be guided by the Spirit. The voice of the Lord has come into my mind, in sentences, in answer to prayer.”[4]

To another group he explained that

In my own life, I have had answers, as a result of long periods of faithful fasting and prayer. I have had the answers of God come into my mind with the same distinctness that Enos had when the answer came to his mind and he said, “The voice of the Lord came into my mind again, saying.” I have had that experience; sentences, names, have been given to me. I know this is true and in my soul is an absolute certain witness. I know if it were necessary for us to do it, we could go into our secret chambers or on the mountaintop and hear the voice of God as plainly as the Prophet Joseph did. I know that to be a truth.[5]

Standing before an audience of Church Educational System instructors, he taught: “I just talk to the Lord. And I want to testify that you can pray that way so you can hear his answer, as Enos heard it. Enos said that the voice of the Lord came into his mind (see Enos 1:10). I know that is possible because I have heard it on many occasions as plain as if it were in my ear; the voice of the Lord comes into my mind.”[6]

[2] (Boyd K. Packer, “The Weak and the Simple of the Church” General Conference, October 2007; https://www.lds.org/general-conference/2007/10/the-weak-and-the-simple-of-the-church?lang=eng)