Refuting and Correcting BYU’s False Doctrine on the Origin of Man #36 - President Gordon B. Hinckley on Evolution 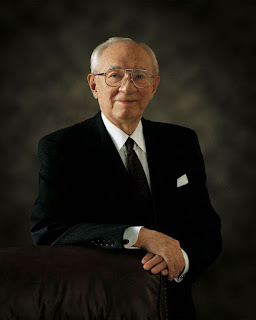 Some mistaken writers have tried to hint, or even outright declare, that President Gordon B. Hinckley was in favor of evolution. I trust the below teachings of President Hinckley’s will settle that question in the minds of reasonable people.

In a First Presidency Message, President Gordon B. Hinckley quoted President Joseph F. Smith on this subject of accepting truth from wherever it may be found, and then added some cautionary explanation of his own:

President Joseph F. Smith once declared: “We believe in all truth, no matter to what subject it may refer. No sect or religious denomination [or, I may say, no searcher of truth] in the world possesses a single principle of truth that we do not accept or that we will reject. We are willing to receive all truth, from whatever source it may come; for truth will stand, truth will endure.” (Gospel Doctrine, Salt Lake City: Deseret Book Co., 1939, p. 1.)

We have nothing to fear when we walk by the light of eternal truth. But we had better be discerning. Sophistry has a way of masking itself as truth. Half-truths are used to mislead under the representation that they are whole truths. Innuendo is often used by enemies of this work as representing truth. Theories and hypotheses are often set forth as if they were confirmed truth. Statements taken out of context of time or circumstance or the written word are often given as truth, when as a matter of fact such procedure may be the very essence of falsehood.

After giving that warning, President Hinckley added: “I remember when I was a college student there were great discussions on the question of organic evolution. I took classes in geology and biology and heard the whole story of Darwinism as it was then taught. I wondered about it. I thought much about it. But I did not let it throw me, for I read what the scriptures said about our origins and our relationship to God.”