President Nelson’s Revelations to the Restored Church of Jesus Christ 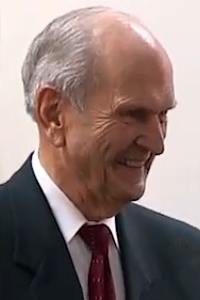 According to Elder Quentin L. Cook, “President Russell M. Nelson has been a commissioned agent of the Lord especially with respect to revelations to” accomplish the following. Elder Cook categorized them thusly:

Further comments from Elder Cook about these and other prophetic revelations follow, as given in conference:

When important changes to bless our homes were announced at the October 2018 general conference, I testified “that in the deliberations of the Council of the First Presidency and Quorum of the Twelve Apostles in the temple, … after our beloved prophet petitioned the Lord for revelation … , a powerful confirmation was received by all.”

At that time, other revelations relating to sacred temple ordinances had been received but not announced or implemented.

This guidance commenced with individual prophetic revelation to President Russell M. Nelson and tender and powerful confirmation to those participating in the process. President Nelson specifically involved the sisters who preside over the Relief Society, Young Women, and Primary organizations. The final guidance, in the temple, to the First Presidency and Quorum of the Twelve Apostles was profoundly spiritual and powerful. We each knew we had received the mind, will, and voice of the Lord.

[Note:] This process and the meetings held occurred in the Salt Lake Temple in January, February, March, and April 2018. The final revelation to the First Presidency and the Quorum of the Twelve was on April 26, 2018.

I declare with all solemnity that continuous revelation has been received and is being received through channels the Lord has established. (Quentin L. Cook, “The Blessing of Continuing Revelation to Prophets and Personal Revelation to Guide Our Lives”)

As leaders have sought revelation, the guidance received over the past few years is to strengthen the sacrament meeting, honor the Sabbath day, and encourage and assist parents and individuals to make their homes a source of spiritual strength and increased faith—a place of joy and happiness.

President Russell M. Nelson’s statements about the Lord’s revelations through him:

“Our plans were to announce six new temples at conference time,” said President Nelson. “The Lord told me on the eve of conference: ‘Announce a temple in India.’ … That was the Lord's doing.”  (from Church News story)

The Lord has impressed upon my mind the importance of the name He has revealed for His Church, even The Church of Jesus Christ of Latter-day Saints. We have work before us to bring ourselves in harmony with His will. In recent weeks, various Church leaders and departments have initiated the necessary steps to do so. Additional information about this important matter will be made available in the coming months. (official newsroom statement)

Nearly every night, some messages come. And I write them down on a piece of paper in the dark so I don’t wake Wendy. The challenge is trying to read them in the morning! But I write enough to trigger a memory of the instruction that I had received. (talk given at a stake in California, was reported in Deseret News)

When I pray about you and ask the Lord how He feels about you, I feel something far different from what the researchers say. Spiritual impressions I’ve received about you lead me to believe that the term Millennial may actually be perfect for you. But for a much different reason than the experts may ever understand. . . .

We sustain 15 men who are ordained as prophets, seers, and revelators. When a thorny problem arises—and they only seem to get thornier each day—these 15 men wrestle with the issue, trying to see all the ramifications of various courses of action, and they diligently seek to hear the voice of the Lord. After fasting, praying, studying, pondering, and counseling with my Brethren about weighty matters, it is not unusual for me to be awakened during the night with further impressions about issues with which we are concerned. And my Brethren have the same experience.

The First Presidency and Quorum of the Twelve Apostles counsel together and share all the Lord has directed us to understand and to feel individually and collectively. And then we watch the Lord move upon the President of the Church to proclaim the Lord’s will.

This prophetic process was followed in 2012 with the change in minimum age for missionaries and again with the recent additions to the Church’s handbook, consequent to the legalization of same-sex marriage in some countries. Filled with compassion for all, and especially for the children, we wrestled at length to understand the Lord’s will in this matter. Ever mindful of God’s plan of salvation and of His hope for eternal life for each of His children, we considered countless permutations and combinations of possible scenarios that could arise. We met repeatedly in the temple in fasting and prayer and sought further direction and inspiration. And then, when the Lord inspired His prophet, President Thomas S. Monson, to declare the mind of the Lord and the will of the Lord, each of us during that sacred moment felt a spiritual confirmation. It was our privilege as Apostles to sustain what had been revealed to President Monson. (From talk, Becoming True Millennials)

Elder Cook’s comments on the revelation on the priesthood:

We are incredibly grateful for the revelation to President Spencer W. Kimball extending priesthood and temple blessings to all worthy male members of the Church in June 1978.

[Note 10]: See Official Declaration 2; see also 2 Nephi 26:33. The revelation implemented doctrine set forth in the Book of Mormon that “all are alike unto God,” including “black and white, bond and free, male and female” (2 Nephi 26:33). This remarkable revelation was received and confirmed in the sacred upper room of the Salt Lake Temple by the Council of the First Presidency and Quorum of the Twelve Apostles.

I have served with many of the Twelve who were present and participated when that precious revelation was received. Each of them, in personal conversations, confirmed the powerful and uniting spiritual guidance President Kimball and they had experienced. Many said it was the most powerful revelation they had received before or after that time.

[Note 11]: Many of the Apostles indicated that the revelation was so powerful and so sacred that any words used to describe it would be insufficient and, in some ways, would diminish the deep and powerful nature of the revelation.