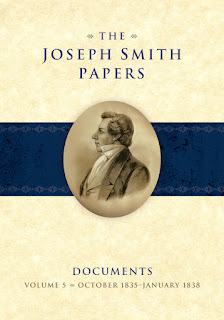 (Page numbers are from an Advance Review Copy, and may be different in the published version.)

This volume covers an interesting period of Joseph Smith’s life that includes the finishing and dedication of the Kirtland Temple and the associated visions, work on the Book of Abraham, the Kirtland Safety Society, and persecution and apostasy. Some of the documents included are from Joseph Smith’s journals, and so have already been published in Journals, Volume 1:1832-1839. Others are from Minute Book 1, archival collections, periodicals, other peoples’ diaries, legal records, etc. There are no journals available covering April 1836 to January 1838, so some of the best contemporary sources were chosen to try to fill things in.

The book starts with the usual material for this series, including a timeline of Joseph Smith’s life, maps, an explanation of the Joseph Smith Papers Project, a volume introduction, and an explanation of the editorial method. The book is then divided into seven parts, based on time periods. There is an appendix with blessings to Don Carlos Smith, Oliver Cowdery, Frederick G. Williams, and Sidney Rigdon. And then there is the usual reference material with source notes, a chronology, geographical directory and maps, pedigree chart, biographical directory, organizational charts, essay on sources, works cited, a cross-reference with the Doctrine and Covenants, index, etc. At the very back is a note about resources available on the Joseph Smith Papers website that relate to the series as well as this particular book.

Most of the first and second chapters of the Book of Abraham are included as “Book of Abraham Manuscript, circa Early June - circa November 1835-A [Abraham 1:4-2:6].” There is a historical introduction that explains how the papyri were obtained and what is known about the translation, as well as the publication in Times and Seasons. A footnote points out that “Though a notice printed in the 1 February 1843 issue of the Times and Seasons suggested that JS would publish ‘further extracts’ from the Book of Abraham, there is no documentary evidence that other extracts were produced. All extant manuscripts generated by JS and his associates during their study of the Egyptian papyri, dated circa 1835 to circa 1842,  are available at the Joseph Smith Papers website, josephsmithpapers.org.” (page 77)

This is followed up by “Egyptian Alphabet, circa Early July - circa November 1835-A.” This is explained as “the only extant document among the larger collection of Egyptian-related materials that contains JS’s handwriting; portions of the text are also in the handwriting of Cowdery and Parrish. Five pages in length, the manuscript contains various characters, some of which are followed by their pronunciation and interpretation…. That the characters in the Egyptian alphabet presented here were copied from more than one source suggests that what is termed as ‘Egyptian alphabet’ may have been part of a comprehensive project that synthesized characters from various source texts” (page 82.) It is unknown how the document was produced, but the interpretations do not match modern translations.  It “may have been an effort by JS and his associates to decode characters that they assumed stood for larger concepts.” (page 83)

There are many documents related to the Kirtland Temple, including minutes of the dedication with all the words to the hymns sung and the dedicatory prayer. There is a diagram of the temple and a photo of the interior. “The spiritual outpouring that occurred in Kirtland, Ohio, when the House of the Lord was dedicated on 27 March 1836 continued in the days following that special event. Three days after the dedication, participants reported, the promised endowment of power occurred at a solemn assembly. This event marked the culmination of a series of instruction from JS and other church leaders, the organizing of the church’s priesthood structure, and the administration of rituals. JS’s journal records that another significant event took place on the afternoon of 3 April: JS and Oliver Cowdery experienced a vision of Jesus Christ and visitations from Moses, Elias, and Elijah…. FInally, 6 April 1836, the sixth anniversary of the church’s organization, was ‘set apart as a day of prayer to end the feast of the Passover and in honor of the jubilee of the church.’ That day men ordained to the priesthood met to observe and participate in sacred ordinances. According to Heber C. Kimball, as the meeting continued, ‘the spirit of prophecy was poured out upon the Assembly,’ and this ‘marvellous spirit’ continued for several days.” (page 213) 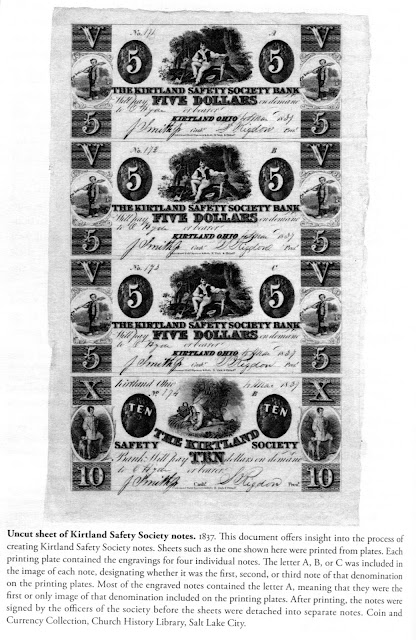 Part 5 contains documents associated with the Kirtland Safety Society. The volume introduction and the section introduction give the history of the institution in the broader context of the financial troubles of the time, which were both the motivation for its creation and the cause of its downfall. The documents include the Constitution of the Kirtland Safety Society Bank, Articles of Agreement for the Kirtland Safety Society Anti-Banking Company, pictures of the notes that were produced, and associated agreements and correspondence. “Extant sources offer little credible documentation of monetary losses caused by the Kirtland Safety Society’s closure, but it is clear that only a few individuals invested sizable funds in the institution. Joseph Smith invested the most money, several thousand dollars, and no one lost more in the collapse of the Safety Society than he did. The devaluation of society notes and the unwillingness of other banks to accept the notes as payment contributed to the financial hardships in Kirtland, but most individuals there were more adversely affected by the broader Panic of 1837, which caused the price of goods to increase and land values to decrease drastically.” (page xxxii)

As with the other volumes from the Joseph Smith Papers Project, there is much of interest between the covers of this book. Many hours can be spent perusing its contents by anyone interested in the Kirtland period of church history or in the life of Joseph Smith in general. I found that my reading of the material about the Kirtland Temple enhanced my experience covering the same topic in Sunday School today.