A Walk Through Time with Elder Bruce R. McConkie 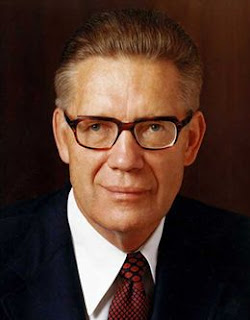 (Compiled by Dennis B. Horne)

Note: This material constitutes my Christmas present to those who admire Elder McConkie and rejoice in his gospel teachings and testimony.

At the October 1946 general conference, 31-year-old Bruce McConkie sat down at the Deseret News press table to take notes to be published the next day in the newspaper he worked at. He was soon tapped on the shoulder by Brother Joseph Anderson, clerk of the conference, who asked him to meet with President McKay. Brother McConkie instantly knew what was wanted. He met with Pres. McKay in the general authorities room in the Salt Lake Tabernacle, were he was interviewed and called to become a member of the First Council of Seventy.

Then conference started and the Brethren began speaking. Brother McConkie had to concentrate on the messages to take notes because he was feeling so flustered by the call. He wrote: “During the meeting I could not look around. . . . Pres. George F. Richards was one of the speakers, and I took the notes necessary to report his sermon. It was on the divine law of love. It calmed my nerves somewhat to be forced to concentrate on the sermon and make notes for newspaper quotation.”

It is at this point that we (figurately) go back in time to the Tabernacle, and hear what Brother McConkie and the congregation heard (using the provided link; you may need a church account to hear the audio file.) At 1:41:44 President George Albert Smith makes a hilarious announcement; at 1:44:30 is another brief (and weird) announcement; Pres. McKay begins the formal sustaining process at 1:44:55, with Brother McConkie’s name mentioned at about 1:47:08—and we hear it as he heard it. President McKay pronounced his name slowly and clearly: https://catalog.churchofjesuschrist.org/assets?id=7b81ee80-75e1-49c7-a0f5-acc6dfc2e69c&crate=0&index=0

Describing his feelings on that occasion, Brother McConkie wrote: “I could not look up. He made a few remarks about the release of the Patriarch to the Church, there must have been a song, although I do not remember it, there was a prayer and the Conference was over.”

Those who listen will find that the rest of the sustaining actually took some little time, as did the reading of the resignation letter from Patriarch Joseph F. Smith. What an emotional ordeal that period of elapsed time must have been! “People began crowding around me. Perry Lee had been the first to shake hands with me after my name was read. Many others followed including several of the mission presidents and some of the General Authorities.” . . . “Pres. George Albert Smith came down the stairs, and I said, ‘I am Bruce McConkie.’ I had not met him before other than that years before I believe I had shaken hands with him.” . . . “Pres. Smith said, ‘We have a lot of work for you to do. You will have to be good to live up to all the good things I have heard about you.’ I said that with the help of the Lord I would try. He said, ‘The Lord bless you.’ “

Of the first meeting of the First Presidency and Quorum of the Twelve and First Council of the Seventy that he attended, Elder McConkie recorded, “Seated in that council meeting, I felt the calm and joy of the Spirit of the Lord as I have never felt it. It seemed as though Pres. Smith was speaking the word of the Lord, or even as though the Lord himself was there before us telling us his will.”

Several more years pass until we again visit general conference, this time in October 1950, and this time we can watch Elder McConkie as he preaches the gospel—and my but he looks young (his message starts almost a minute in): https://catalog.churchofjesuschrist.org/assets?id=be3fcfe6-75d6-48d4-ac58-c90153ca2698&crate=0&index=0

We notice he blinks a lot while he speaks and we are not sure if it is because of nerves or because the new television broadcast camera lights are too bright or both or neither. But he preaches a strong sermon nonetheless; it is the oldest known public footage of him speaking that exists; very rare but precious for our trip back in time.

We visit again in the next year for the October 1951 conference, and listen to Elder McConkie speak (starts at 47:32). This time, near the end of his address, he shares a special spiritual experience of hearing the voice of the Lord in his mind (at 1:00:25). We hear his voice crack with emotion as he shares and bears witness of this personal revelation:

Another year passes in our time travel (to October 1952), and we see recently-returned mission president Oscar W. McConkie Sr. (Elder McConkie’s father), sitting in his office near temple square, peacefully listening to general conference on the radio, when he hears his name announced—that if he is in the Tabernacle audience he should take a seat near the front (at 1:25:45 mins. in). He must throw his tie and coat on and hurry to the Tabernacle quickly, for he only has one talk’s worth of time to arrive before he himself is called upon to speak (the only publicly recorded address given by Oscar McConkie that I know of). His message starts at 1:42:34 minutes in. He begins slowly but builds to an impassioned and powerful address that leaves hearers strengthened in faith and testimony. At 1:50:26 Oscar McConkie relates a precious spiritual experience he had as a mission president when praying for greater faith in his calling. Like his son, he also speaks of hearing the voice of the Lord in his mind and relates what he heard the Spirit tell him: https://catalog.churchofjesuschrist.org/assets?id=023a9bf0-f621-4c80-8a9b-571bf5b7aa0b&crate=0&index=0

The next day, in the Sunday afternoon conference, Oscar’s son Bruce again speaks, but takes less than 3 minutes, one of the shortest talks ever given in conference (1:15:23 mins in):

Elder McConkie starts out saying, “Just this brief word. . .” and keeps it that way. I speculate he spoke so briefly in deference to the time his father was given, to provide more time for other speakers, though that is but a guess. (Finishes at 1:18:11)

We then step forward in time with Elder McConkie, and come to his last conference address as a member of the First Council of the Seventy. In this address he bears a perfect testimony of Jesus Christ. We again hear his voice tinged with emotion as he bears his witness of Jesus the Christ. Of this (April 1972) address he wrote: “In the General Conference . . . [The Lord] poured out upon me and the whole congregation his Spirit in a manner far exceeding anything else that had ever happened to me in connection with any talk or sermon I have ever delivered. What I said on that occasion came from him so that the attending spirit carried the message into the hearts of people with convincing power. I claim no honor, the Lord did it.” And, “Since my call [to the Quorum of the Twelve] numerous persons have told me that they knew beforehand it was to be and that the inspiration came to them when I spoke in the April Conference or when I delivered the funeral service [of President Joseph Fielding Smith] or when some other recent event occurred in which the Spirit of the Lord was involved.”

At the general conference after Elder McConkie’s call to the apostleship, he again shared his witness of Jesus, this time as a formally ordained special witness. He states matter-of-factly that, “I have a perfect knowledge that Jesus Christ is the Son of the living God and that he was crucified for the sins of the world.” He indicates that he has heard the actual voice of the Lord Jesus Christ speaking to him: “I know there is revelation in the Church because I have received revelation. I know God speaks in this day because he has spoken to me”—but he does not share with the congregation and television/radio audience what exactly the personal revelation said as he wrote it down. He does however share again his earlier personal revelation from 1951: “With reference to these brethren who hold the keys of the kingdom of God at this hour, the voice of the Lord to his people is: ‘These are they whom I have chosen as the First Presidency of my Church. Follow them.’” We again detect a tinge of emotion as pure and perfect testimony is borne.

And so our walk through times past with Elder McConkie comes to a close, but we realize that others like unto him have left their mark in history as well.

For instance, we listen to Elder Melvin J. Ballard of the Twelve, grandfather of President M. Russell Ballard, speaking in conference just two years before his own graduation into the Spirit World, as he bears his apostolic witness of Jesus Christ, whom he had years before seen and handled as a glorious personage: Elder Melvin J. Ballard begins speaking at 13:13; his testimony of the resurrected Jesus starts at 24:05: https://catalog.churchofjesuschrist.org/assets?id=54373712-0a15-4023-8fcc-051c9c84f9b5&crate=0&index=0

We also visit a few other general conferences from times past, and find that, to our joy, two video recordings of Elder Matthew Cowley’s marvelous orations were made and preserved, and we can enjoy these rare recordings and learn from this apostle possessed of such great faith:

Elder McConkie’s second conference address, 31:50; about the church and kingdom of God remaining on earth forever:

Elder McConkie’s third conference address, 1:02:17; bears his testimony at beginning; the main subject of the discourse is salvation for the dead, and the limits it has for the living who have opportunity but don’t accept it: