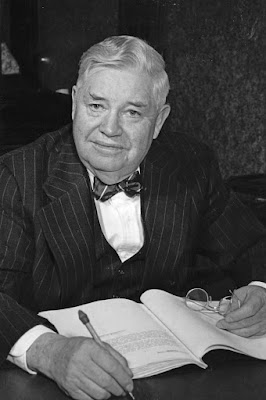 (Part nine of a series compiled by Dennis B. Horne)

When Latter-day Saint historians name those they view as the leading or most prominent and influential of all the men who have served as counselors in the First Presidency, along with names such as Heber C. Kimball, George Q. Cannon, Joseph F. Smith, and Gordon B. Hinckley, President J. Reuben Clark stands with them. So many of his protégé’s have spoken so highly of him: Presidents Lee, Romney, Packer, Monson, and Hinckley to name but a few. He moved directly from high government service to even higher church responsibility. I could take pages extolling his contributions to the work of the Lord in the latter days, but such would steer wide of the purpose of this piece. Suffice it to say that President Clark’s teachings and thoughts and witness place him as one of the foremost figures in the Church:

Testimony as related by Elder Glen L. Rudd:
About thirty years ago I received a phone call in my office at Welfare Square from Elder Harold B. Lee.  He wanted me to drop everything and come immediately to his office. When I arrived, he introduced me to a very splendid gentleman from England. He was a member of the British cabinet—the solicitor general of Great Britain. He was a man in his early fifties. Brother Lee took this gentleman and me into the First Presidency’s reception room where we were joined by President J. Reuben Clark, Jr. of the First Presidency. President Clark was past ninety ears of age and was having difficulty walking. However, he was in complete control of his faculties. He seated Brother Lee at one end of the large table in this room, and me at the other end. He sat on one side at the middle of the table and asked the gentleman from England to sit directly across from him. I thought to myself, “What will they talk about? I am sure he will ask how the Prime Minister is and how legal matters are going in Great Britain.” I thought that President Clark, being interested in international affairs, might ask about those matters. However, President Clark, without any apologies and without any hesitation, began to bear his testimony of the reality of the First Vision. He told in simple terms how and why Joseph, as a boy, went into the Sacred Grove. He then told what actually happened, how Joseph knelt in prayer and how the power of Satan almost overcame him. Then President Clark told of the light appearing and the appearance of God the Father and the Son. Never once did he apologize or say, “We believe this.” He spoke in absolute facts and in such a manner that the three of us listening were completely captivated by the simplicity in which he told this marvelous experience. At that moment I thought nobody on this earth could deny that testimony. The man from England listened intently. President Clark spoke with great intent. It was a great moment in my life as I listened to a ninety-year old prophet of God tell the magnificent account of one of the greatest events that has ever taken place on this earth. I am sure the man from England never forgot that great experience. I surely have not and quite likely never will.[1]

With no more fanfare than marked the coming of the prophets of old from the homes of the lowly and humble, we come to the First Vision.
Pardon the details I give, but I think they must be in our minds. The purpose of Joseph’s prayer in the grove was his desire to learn which of the various contending sects was right. The power of evil finally deserting Joseph, he asked the two glorious personages standing above him, the Father and the Son He had introduced, which of the sects he should join. He says:
“I was answered that I must join none of them, for they were all wrong; and the Personage who addressed me said that all their creeds were an abomination in his sight; that those professors were all corrupt; that: ‘they draw near to me with their lips, but their hearts are far from me, they teach for doctrines the commandments of men, having a form of godliness, but they deny the power thereof.’
“He again forbade me to join with any of them; and many other things did he say unto me, which I cannot write at this time” (Joseph Smith—History 1:19–20).
So the vision closed. The world had ripened in spiritual apostasy and iniquity. The curtain had risen on the dispensation of the fulness of times, which would bring the refreshing, the restitution, and the restoration promised by Peter and John in the temple, for this was God’s prime concern for His children.
Following the First Vision, events moved as rapidly as the unschooled, untrained, unprejudiced mind of Joseph could proceed. Joseph was 14 years old, not so young by years as was Samuel when called by the Lord to take over from Eli, nor was he more unschooled than the humble fishermen called from their nets on the shores of Galilee, nor more untrained than were they, and not by far so prejudiced as those men who were themselves steeped, with their ancestors for generations before them, in the beliefs and rituals of the Mosaic law. All were minds in virgin innocence of doctrines and principles of the gospel to be restored and of the priesthood to be bestowed. But God had again set His hand to the plow. There would be no forsaking the furrow He was now turning over in the field of humanity. He again drove ahead, for His work and His glory was “to bring to pass the immortality and eternal life of man.”
As soon as physical maturity came to Joseph sufficient to meet the trials and hardships that were to be his, there came first a visit of Moroni, a messenger “sent from the presence of God” to prepare Joseph for the translation of the Nephite records and the bringing forth of them as the Book of Mormon. Moroni told Joseph regarding the book “that the fulness of the everlasting Gospel was contained in it, as delivered by the Savior to the ancient inhabitants” (Joseph Smith—History 1:33–34).
The record containing this fulness was in due time delivered to Joseph, was translated and printed so men could read once more the unpolluted words of God.
The essential purpose of all previous dispensations—the restoration of the pure gospel of Jesus Christ—had at this point been reached.[3]

(See also the next installment, #10, for Pres. Clark’s teachings about being a latter-day saint and accepting the First Vision.)

[1] J. Reuben Clark, Jr., as quoted in Thoughts on Welfare from the Words of President Harold B. Lee, comp., Glen L. Rudd (Salt Lake City: Privately published, n.d), 142.
[2] On the Way to Immortality and Eternal Life, chap 16, “The First Vision”.
[3] “The Genius of Our Church Organization,” Lecture given to Seminary and Institute Teachers, June 17, 1958; Brigham Young University.