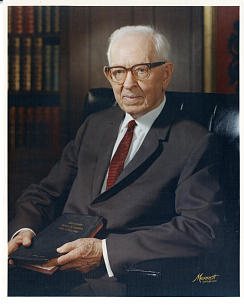 (Part eleven of a series compiled by Dennis B. Horne)

President Smith was the grandson of Hyrum Smith, brother to the Prophet Joseph Smith. He was and still is considered one of the great expounders of doctrine and interpreters of the scriptures in this dispensation. He became President of the Church with the death of President David O. McKay. He felt a special responsibility and therefore took pleasure in teaching about his forebears and the mission they performed as church leaders. His words reflect that obligation:

I want to say to all those who are listening at this particular time that I have a testimony that Joseph Smith was a Prophet of God, and is, for his work has not ceased, for a righteous man's work does not cease: Joseph Smith was a righteous man when he died; I know that he was called, appointed by our Father in heaven; that he received revelation and guidance from the Son of God that would be of benefit and a blessing to all men if they would receive it.
Now in what I have to say I wish to direct my remarks to those who are not members of the Church, if there are any such listening. I want them to know that I believe this sincerely and absolutely. That is my faith. I think I can say safely it is my knowledge, by the gift of God, that Joseph Smith in the year 1820 did see the Father and the Son; that the Father introduced his Son; that the Son spoke to him, asked him what he wanted to know, and gave him counsel; told him what to do, with the promise that eventually other light would come and the fulness of the gospel, which was not then upon the face of the earth, would be restored.


This is either true or false. To me it cannot be false. To you who sit here looking at me it cannot be false. It is just as true as it is that the sun shines. You know it, and I know it. And every soul upon the face of the earth who has a desire to know it has the privilege for every soul that will humble himself, and in the depths of humility and faith, with a contrite spirit, go before the Lord, will receive that knowledge just as surely as he lives, so that he also may know that this story is true.
I am just as firmly convinced that this Book of Mormon from which I have read is the word of God and was revealed, as Joseph Smith declared it was revealed, as I am that I stand here looking into your faces. Every soul on the face of the earth who has intelligence enough to understand may know that truth. How can he know it? All he has to do is to follow the formula that was given by the Lord himself when he declared to the Jews that they who would do the will of his Father should know of the doctrine, whether it was of God or whether he spoke of himself. My witness to all the world is that this book is true. I have read it many, many times. I have not read it enough. It still contains truths that I still may seek and find, for I have not mastered it, but I know it is true.
I know that the testimony of these witnesses recorded in each copy of the Book of Mormon is true, that they stood in the presence of an angel of God who declared unto them that the record as it was translated was correct, that their testimony that God spoke to them from the heavens calling upon them to bear witness of that fact is true, and there is not a soul who cannot receive that testimony if he desires to receive it, by reading this book prayerfully and faithfully, with a desire to know the truth as Moroni has declared by revelation. He shall know the truth regarding the restoration of this scripture given to the ancient inhabitants of this continent.
Now this declaration or testimony that I have given is vital to every living soul, for I want to say that if a man unto whom the knowledge of this record comes, and unto whom the testimony has been given that Joseph Smith saw the Father and the Son, and that the gospel was restored by commandment of God and the coming of angels, rejects that testimony and will not follow it through, he will have to face it before the judgment seat of God and give answer why he refused to harken—so it is a vital message to every soul.
Every man who rejects this record, who rejects the testimony of Joseph Smith, who declares him to be a false prophet and this book a fraud, who has had this testimony which it contains given unto him, will stand before the judgment seat of God condemned, because the truth was laid before him. He had the opportunity to hear and receive, and in rejecting it he has placed himself in disfavor with his Father in heaven.
https://archive.org/stream/conferencereport1949sa#page/n88/mode/1up

I feel humble, and also I feel the loss of our beloved President, just as you who are assembled here feel that loss. With the help of the Lord, I shall bear my testimony. I am very grateful to the Lord for the knowledge that I have of the truth of this divine work. I was baptized when I was eight years old. It was impressed upon me at that time that through baptism I had received the remission of sins and stood pure, clean, before the Lord. I had a sister who was very kind, as all my sisters were, who impressed upon my mind the need of keeping myself unspotted from the world. Her teachings to me the day I was baptized have stayed with me all the days of my life, and I honor her memory.
I have a perfect knowledge of the divine mission of the Prophet Joseph Smith. There is no doubt in my mind that the Lord raised him up and gave him revelation, commandment, opened the heavens to him, and called upon him to stand at the head of this glorious dispensation. I am just as satisfied in my mind that in his youth when he went out to pray he beheld the actual presence, stood in the actual presence, of God the Father and his son, Jesus Christ; in my mind there is no doubt; I know this to be true. I know that he received later the visitations from Moroni, the Aaronic Priesthood under the hands of John the Baptist, the Melchizedek Priesthood under the hands of Peter, James, and John, and that the Church of Jesus Christ of Latter-day Saints was organized on the sixth day of April 1830 by divine command. These things I know. The Lord has revealed them to me. . . .
https://archive.org/stream/conferencereport1951a#page/n58/mode/1up

I wish to bear testimony to the restoration of the gospel, to the mission of our Redeemer, to the call of the Prophet Joseph Smith and the establishment of this work in the dispensation in which we live, known as the Dispensation of the Fulness of Times. I know absolutely that Jesus Christ is the only Begotten Son of God, the Redeemer of the world, the Savior of men insofar as they will repent of their sins and accept the gospel. Through his death he redeemed all men and took upon him that sacrifice which would relieve us of our sins that we may not answer for them if we will accept him and be true and faithful to his teachings.
I am just as fully satisfied, because I know, that the father and the Son appeared to Joseph Smith and revealed to him the great truth which had been lost because of the wickedness of the world; that they are separate distinct Personages; that the father and the Son, together with the Holy Ghost, constitute the Godhead, the great ruling power of the universe; that Jesus Christ volunteered to come into this world to redeem it; that John the Baptist came to the Prophet, as did Moroni before him, and Peter, James, and John later, to give authority and to usher in the kingdom of God anew in this dispensation in which we live, because men had turned away from the truth. Through darkness which covered the earth they had lost the knowledge of God; they had transgressed the laws and changed the ordinances; and instead of teaching the simple truths of the gospel of Jesus Christ, they taught the commandments of men just as the Lord Jesus Christ declared to the Prophet Joseph Smith.
https://archive.org/stream/conferencereport1956a#page/n60/mode/1up

Interested readers desiring to read more of Joseph Fielding Smith’s teachings may desire to peruse his lengthy piece in the April 1920 Improvement Era, “Origin of the First Vision.”