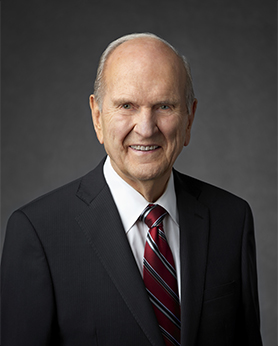 Messages assembled by Dennis B. Horne

In his “Closing Remarks” of the October 2019 General Conference, President Russell M. Nelson invited members to ask themselves questions about what their life and their world would be like without the Restoration of the gospel of Jesus Christ and the major events that attended it. One example he gave was this: “Our course of study for next year in Come, Follow Me is the Book of Mormon. You may wish to ponder important questions such as, ‘How would my life be different if my knowledge gained from the Book of Mormon were suddenly taken away?’”
As it happens, President Nelson has himself asked and answered this very question. It seems he has not asked the membership of the Church to do something he himself has not done, and we might also conclude that he found the exercise so valuable that he felt inspired to invite others to do likewise. Even though Pres. Nelson indicated we could and should come up with our own questions, I would suppose that it could not but help to review and study his insightful questions and answers. He did this in an address to the Church not long before he became its president.
At the bottom of President Nelson’s General Conference talk The Book of Mormon: What Would Your Life Be Like without It?, is (the below) information that is not found in the talk as delivered (in 2017) and constitutes something of an appendix to his message—counsel that he continues to promote as President of the Church.

All of the text below is from President Nelson. The bold headings and the bullet points are from the above named and linked General Conference talk, briefly summarizing items we would miss without the Book of Mormon. The listed items with dashes serving the same purpose as bullet points are from a marvelous address President Nelson gave to new mission presidents being trained in 2016, titled: “The Book of Mormon: A Miraculous Miracle.” In his presentation, he expanded on many of these items, teaching them with greater detail and insight than is possible at the end of a Conference address. I have attempted to integrate and correlate by category the statements Pres. Nelson makes in his lists for readers’ convenience. Readers would of course be best served to read and study both talks closely.
Readers may notice some (of what I consider to be) new doctrine, or at least doctrine I had not heard before, explaining reasons why America is the promised land, a land choice above all other lands. As far as I know, his teachings on this particular subject are not commonly known in the Church.
There is also wording clarifying that Alma 13 is indeed talking about foreordination in the pre-mortal existence, and not something else as some have theorized.
God be thanked and praised for a prophet that shares such inspiration:

President Nelson’s Book of Mormon Lists
The Book of Mormon is:
-The Book of Mormon is the great clarifier of doctrine. It refutes many myths. At the same time, it affirms truths previously obscured and reveals many glorious facts of the doctrine of Christ that were lost or previously unknown.
The Book of Mormon affirms:
-Resoundingly, the Book of Mormon affirms the existence of a living and loving Father in Heaven.
-It affirms the nature of our Heavenly Father’s plan of salvation, happiness, and mercy.
-It declares, as another testament, the generation and divinity of Jesus the Christ.
-It teaches of His mission and His ministry.
-The Book of Mormon stands as a global beacon of eternal truth. The Lord said: “The testimony of two nations is a witness unto you that I am God, that I remember one nation like unto another. . . . And when the two nations shall run together the testimony of the two nations shall run together also.”
-The Book of Mormon affirms the supreme status of man’s moral agency and sets forth eternal standards of accountability and responsibility for our choices.
-It affirms the reality and inevitability of our impending judgment, which will be done with a perfect blending of the justice and mercy of God.
-The Book of Mormon affirms that the people on the Western Hemisphere were among the “other sheep” to whom Jesus had earlier referred.
-And it affirms the existence of other societies to whom Jesus would minister—those we know as the lost tribes of Israel.
-It affirms the reality of premortal life.
-It reaffirms the sanctity and the necessity of the sacrament, as taught in the Bible.
The Book of Mormon refutes notions that:
Let us mention a few myths the book refutes.
-The Book of Mormon refutes the concept of predestination.
-It refutes the idea of the creation ex nihilo—“out of nothing.”
-It refutes the false notion of original sin. It refutes the adequacy of individual goodness alone without exalting ordinances.
-It refutes the practice of infant baptism.
-It refutes methods of baptism other than that of immersion by one bearing proper authority.
-It refutes the notion that revelation from God ended with the Bible.
The Book of Mormon fulfills biblical prophecies that:
The Book of Mormon clarifies understanding about:
The Book of Mormon reveals information previously unknown:
-It reveals the state of the soul between death and resurrection.
-It reveals the endless nature of the priesthood of God and the foreordination of choice spirits called and prepared from the foundation of the world for leadership in these latter days. From the Book of Mormon we know that each of you has been reserved,
foreordained, and foredetermined to come forth at this particular time to accomplish the mighty work you have been called to do.
-The Book of Mormon reveals what the term gospel truly means. The Lord declared, “This is the gospel which I have given unto you—that I came into the world to do the will of my Father, because my Father sent me.”
-The Book of Mormon reveals the important interrelationships between the Creation, the Fall, and the Atonement. One cannot fully comprehend the Atonement without first understanding the Fall; and the Fall of Adam cannot be fully understood without first understanding the Creation. These three great doctrinal pillars sustain each other in God’s eternal plan.
-The Book of Mormon reveals that Joseph, the son of Jacob who was once sold into Egypt, foresaw the Prophet Joseph Smith and his day and noted that there would be many similarities in their lives. Centuries later, the Prophet Joseph stated, “I feel like Joseph in Egypt.”
-The Book of Mormon reveals that the inheritance of Joseph, son of Israel, was not forgotten when land was distributed to the tribes of Israel, as promised in the Abrahamic covenant. Joseph’s inheritance was to be a land choice above all others. It was choice not because of beauty or wealth of natural resources, but choice because it was chosen to be the repository of sacred writings on golden plates from which the Book of Mormon would one day come. It was choice because it would eventually host the world headquarters of the restored Church of Jesus Christ in the latter days. And it was choice because it is a land of liberty for those who worship the Lord and keep His commandments.
-The Book of Mormon reveals that Jesus of Nazareth, born of Mary, is literally the Son of God. No book of scripture bears more solemnly the weighty burden of that testimony than does the Book of Mormon. Its pages contain nearly 4,000 references to the Christ, using more than 100 different titles for Him. His holy name is mentioned on the average of once every 2.8 verses. No wonder this book has been designated “Another Testament of Jesus Christ.”
-The Book of Mormon teaches of the Atonement of Jesus Christ. While the word atone in any of its forms appears in the King James translation of the New Testament only once, in the Book of Mormon atone in any of its forms appears 39 times. And if chapter headings were included, the grand total would be 55 times! No wonder this book contains the fulness of the gospel. It explains the Atonement of Jesus Christ!

There are some things the Book of Mormon is not.
-It is not a textbook of history, although some history is found within its pages.
-It is not a treatise on ancient American agriculture or politics.
-It is not a record of all former people of the Western Hemisphere, but only of particular groups.