President Russell M. Nelson, As the Senior Apostle, Exercises the Keys of the Priesthood 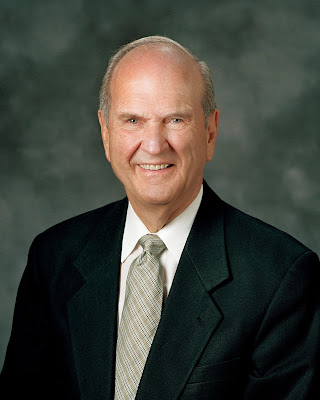 We are now seeing a remarkable and historic example of the President of the Church and Prophet of God exercising the keys of the priesthood which only he holds in their fulness. The active word is “exercising” of the keys, or rights and powers of presidency. This is something that is not and cannot be done in other (man-made) churches, simply because they don’t have the keys or the priesthood, despite all the good they do. They don’t have a Prophet who can turn the authorized work of the Lord on and off as the Lord directs. But such sacred power is vested in the President of The Church of Jesus Christ of Latter-day Saints.
Elder Bruce R. McConkie explained:

The way these things work is this:  There is priesthood on the one hand (which is God’s power and authority), and then there are keys on the other hand.  Keys are the right of presidency which authorize the use of the priesthood for a particular purpose.  Peter, James, and John brought the priesthood, which is power and authority, and then somebody else came and gave the keys which authorized the priesthood today to baptize, to perform eternal marriages, and to preach the gospel in all the world—a whole host of uses.  On the other hand, we can’t use the priesthood today to resurrect somebody, because the keys have not been given and we are not authorized to use God’s power for that purpose.  The way the keys operate is that they center in one man at a time and that man is the President of the Church.  They are conferred upon all the Twelve, but they lie dormant in them unless they become the senior apostle, because keys are the right of presidency and only one man presides over all others.  So you can never perform an act by the authority of the priesthood, alone.  You must have the authority of the priesthood and in addition you must have the authorization to use the priesthood for a purpose, which is keys.


I hold the Melchizidek priesthood but I cannot go out and resurrect someone because no one on earth or in heaven has authorized me to use my priesthood for the purpose of resurrecting somebody.  When they do confer that key, I’ll be able to do that.  But somebody has authorized me to use the priesthood for the purpose of sealing couples in eternal marriage in the temple.  So I go to the temple and seal people together.  I didn’t always have that right—until the one who has the keys gave me the right to use my priesthood for that purpose.  Since he has I’ve been able to do it.
It takes priesthood and it takes keys and unless both of them are present an ordinance cannot be performed that is binding in heaven.  The Lord gives the keys to the President of the Church in their totality.  Hypothetically, the President of the Church could say, “we will not preach the gospel to the world,” and all the missionaries would have to come home.  Or the President of the Church could say, “we will not perform baptism” and nobody could ever perform another valid baptism.  Or he could say “ we will not perform any more plural marriages,” and no one could perform a valid plural marriage.  He could say celestial marriage itself will stop and it would stop because he holds the keys and gives the voice of God to the world.  Nothing is valid and binding unless there is both priesthood and keys. (“Celestial and Plural Marriage,” unpublished Church Educational System class lecture [BYU Lecture Series, summer 1967], 18-20.)

We are now seeing President Nelson turn those keys in behalf of the Saints and the world. He has turned off some missionary work, most temple work, and the gatherings of the Saints. He has directed and ordered it as he has felt inspired by the Lord so to do. When the Corona virus pandemic is over, he will turn it all back on again, as directed by the Lord. The implementation is figuratively likened to turning a key in a door lock. He holds the keys; the Church formally functions under them by the power of the priesthood and the gift of the Holy Ghost.
We get so used to seeing them in use that we sometimes forget that the resurrected Christ has authorized their use through the one man who holds them in their fulness and has the right to say: “Thus far we will go and no further.” This is the ultimate power and authority of the Prophet of God on earth, and exceeds all other earthly powers. God is at the helm and directs His Church. The counselors in the First Presidency and the members of the Quorum of the Twelve, who hold the keys with him and use them at his direction, have sustained him and united with him in his use and administration of the keys. This is a modern Apostolic marvel of priesthood administration we are witnessing.
At the Council of Adam-ondi-Ahman, the Presidents of the Church and other key holders will deliver them back up to Christ, who will then reign personally on the earth, as the scriptures and the prophets have taught.
Elder Boyd K. Packer shared this story, speaking of the Keys:

In 1976 an area general conference was held in Copenhagen, Denmark. Following the closing session, President Spencer W. Kimball desired to visit the Vor Frue Church, where the Thorvaldsen statues of the Christus and of the Twelve Apostles stand. He had visited there some years earlier and wanted all of us to see it, to go there.
To the front of the church, behind the altar, stands the familiar statue of the Christus with His arms turned forward and somewhat outstretched, the hands showing the imprint of the nails, and the wound in His side very clearly visible. Along each side stand the statues of the Apostles, Peter at the front to the right and the other Apostles in order.
Most of our group was near the rear of the chapel with the custodian. I stood up front with President Kimball before the statue of Peter with Elder Rex D. Pinegar and Johan Helge Benthin, president of the Copenhagen stake.
In Peter’s hand, depicted in marble, is a set of heavy keys. President Kimball pointed to those keys and explained what they symbolized. Then, in an act I shall never forget, he turned to President Benthin and with unaccustomed firmness pointed his finger at him and said, “I want you to tell everyone in Denmark that I hold the keys! We hold the real keys, and we use them every day.”
I will never forget that declaration, that testimony from the prophet. The influence was spiritually powerful; the impression was physical in its impact.
We walked to the back of the chapel where the rest of the group was standing. Pointing to the statues, President Kimball said to the kind custodian, “These are the dead Apostles.” Pointing to me, he said, “Here we have the living Apostles. Elder Packer is an Apostle. Elder Thomas S. Monson and Elder L. Tom Perry are Apostles, and I am an Apostle. We are the living Apostles.
“You read about the Seventies in the New Testament, and here are two of the living Seventies, Elder Rex D. Pinegar and Elder Robert D. Hales.”
The custodian, who up to that time had shown no emotion, suddenly was in tears.
I felt I had had an experience of a lifetime. (Ensign, May 2008, 83–87)

We are now seeing an everyday use of the keys of the Apostleship like few of us have ever witnessed before.