Sister Ida Romney Obtains a Testimony of the First Vision 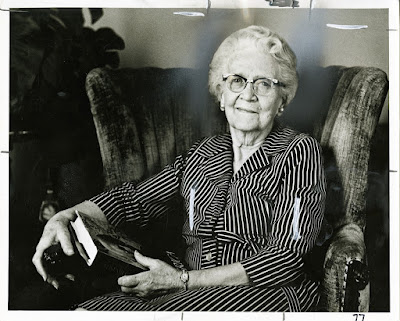 (Part sixteen of a series compiled by Dennis B. Horne)

Two edifying accounts of the same story relating how Ida Romney, wife of President Marion G. Romney (a former counselor in the First Presidency), gained a witness of the reality of the First Vision. The first is from a Church News interview and the second is a more detailed account shared by her husband:

Sister Ida Romney as told by Gerry Avant, editor of the Church News:
After I wrote about Sister Camilla Eyring Kimball in early March 2019, I began thinking about other women of faith I’ve met during my career at the Church News. One of them was Ida Jensen Romney, wife of President Marion G. Romney, who was then a counselor in the First Presidency. (He had been a General Authority since 1941; he died in 1988.)
I interviewed Sister Romney in their home in preparation for a feature article about her that was published Jan 16, 1974.
She reviewed a time when she had to know for herself that Joseph Smith was a true prophet of God. As a member of a stake Sunday School board, she was assigned to teach the teachers in the stake. Although she didn’t have a college degree, she had a teaching certificate.
“One man was a graduate of the University of Idaho,” she said. “His wife (who was not a member of the Church) was also a college graduate. She attended the meetings with her husband.
“It never bothered me to have her in the class until one day our lesson was about Joseph Smith’s First Vision. I was preparing it, and I thought about this woman.
“‘She’s an educated woman,’ I thought to myself. ‘She’s going to think I’m crazy when I tell this story.’”


Feeling discouraged over the lesson’s preparation, she went downstairs to talk with her mother, explaining that she wouldn’t be able to give that lesson. “I don’t know that it’s true,” she tearfully told her mother.
Her mother replied: “You do, too! You’ve been taught it all your life, and you’ve taught it in other classes. I’ve heard you bear your testimony that you know it’s true.”
Sister Romney said that she quietly replied, “Yes, but I still don’t know it.”
Relating that incident, Sister Romney said that her mother counseled her, saying, “My dear, what did Joseph Smith do when he had to know which was the right church? I suggest you follow his example.”
“I’ll never forget that,” Sister Romney said. “I went upstairs, needing to know that Joseph Smith was a prophet. I pleaded with the Lord; I told Him I had to know that this was true for myself, or I couldn’t give the lesson.
“I went to the meeting that Sunday,” Sister Romney said as she reflected on that long-ago quest for a testimony. “When I gave that lesson, I looked at that woman. I knew I didn’t have to just say words; I didn’t have to just repeat what I’d been taught. This time, I knew. It has been a great strength to me all my life.”

President Marion G. Romney tells the same story:
Let me tell you an experience of the girl who later became my wife. At one time she was a member of a stake Sunday School board. As such, it was her responsibility to instruct teachers in a union meeting class. The lesson for a particular session was the Prophet’s vision of the Father and the Son. She was aware that in the class there would be a graduate from the University of Idaho who was not a Latter-day Saint and who did not believe the gospel. It occurred to her that the account of the Father and the Son’s coming to the Prophet Joseph Smith would not be accepted by this educated, refined, and lovely woman. Thinking about it, she became greatly disturbed. She was not sure that she herself knew it was true. She was so distraught that she sought out her mother. Weeping she said, “Mother, I can’t give that lesson. I don’t know that Joseph Smith had that vision. That woman will laugh at me and ridicule me.”
Her mother was not an educated woman, but she did have a testimony. She said to her daughter, “You know how the Prophet got the vision, don’t you?”
“Yes,” answered her daughter, “he got it by praying to God for wisdom.”
“Why don’t you try that?” said the mother to her daughter.
The daughter went to her room and tried it; she “wrestled” with God, as did Enos. The result was that she went to that union meeting and gave the lesson convincingly, with power beyond her natural abilities. How could she do it? Well, the Holy Spirit came to her in response to her inquiry. She received a burning within her soul. She knew that Joseph Smith had seen the vision, as well as he knew it. She had not seen exactly the same things with her eyes that the Prophet saw, but she had the same knowledge. She knew from Joseph Smith’s description what he had seen, and she had a witness from the Holy Ghost that his account was true.
For audio telling by Pres. Romney, go to 18:20 here:
https://speeches.byu.edu/talks/marion-g-romney/gain-testimony/?M=A